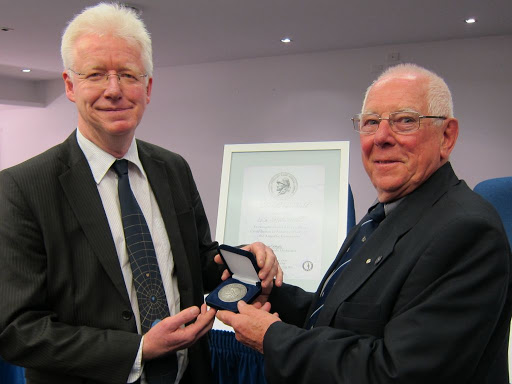 The inaugural 2011 Phillip Law Medal has been awarded to Dr Martin Riddle. Dr Riddle combines both significant academic standing with outstanding achievement and is a worthy recipient that, by making him the first medalist, the reputation of the Medal will be both established and secured.

Introduction
Dr Riddle joined the Australian Antarctic Division in 1994 to found and lead the “Human Impacts Research Program”. This was the first research program of any Antarctic National Program dedicated to understanding and remediating the effects of human activities in Antarctica and on the Antarctic environment.

Such an appointment – and the development of a serious academic interest in the impacts of human activity on the Antarctic environment – was well overdue, especially in regard to the Australian presence there.

As early as 1980, when the Australian press began to take renewed interest in Australian Antarctic endeavour – dormant since the days of Phil Law – there were concerns expressed about the impact of human activity on the fragile polar environment.

Dr Riddle has directly contributed to major advances in environmental understanding and management through guidelines and measures adopted throughout the Antarctic Treaty system. These include wildlife disturbance guidelines, the “unusual animal mortality” response kits, quarantine guidelines and of current major interest, the contaminated sites cleanup.

Dr Riddle also re-established the Australian Antarctic diving program as a key component of research into the previously much neglected near-shore environment, which was the ultimate destination of much of the rubbish from coastal stations in the earlier years of occupation.

Dr Riddle is well known in the Tasmanian and Australian media as a tireless advocate for care and maintenance of the polar environment and its unique and fragile biota. His excellent communication skills and personal qualities including approachability have made him a superb advocate for environmental protection and informed debate on this absolutely essential topic for almost twenty years.

He has, through his interactions with the media, raised the profile of environmental research and remediation in the Australian Antarctic Territory (AAT). Dr Riddle has participated in, and also led, many expedition programs in the AAT and in so doing has interacted extremely well with a wide variety of expeditioners. As a result, he is well known and highly regarded by almost everyone with whom he has been in contact.

Dr Riddle is one of those enviable people who (in Kipling’s words) can “walk with kings but keep the common touch” and he has used this rare quality to further his program and thus contribute in a most substantial manner to Australia’s Antarctic Endeavour.

Conclusion
Dr Riddle has made outstanding and original contributions to research science in Antarctica. He is a highly respected and influential member of the Australian Antarctic program, both at home and internationally. He has also, through his personal drive and infectious enthusiasm, involved a very large number of expeditioners in, and heightened their appreciation of, environmental issues.

He is a worthy recipient of the inaugural Phillip Law medal.