Phillip Garth Law stated in his last will and testament…’..My ashes and those of my said late wife are to be transported to Mawson Station in Antarctica on the A.N.A.R.E. relief ship and are to be interred on the West Arm of Horseshoe Harbour at Mawson beneath a cairn of stones near the graves of other A.N.A.R.E. men already resting there.’

An appropriate headstone of Mawson rock is to be erected there on which is to be affixed a bronze plaque carrying the following inscription:

The Australian Antarctic Division arranged to transport the ashes of Phil and Nel Law to Mawson station on Voyage 3 in February 2011.

After further discussion within the National Council of the ANARE Club, it was felt that a second bronze plaque should be placed at the cairn site. We all know who Phil Law is, and know of his extensive contribution to Australian Antarctic history, but it is possible that future generations of ANARE expeditioners or travellers visiting Mawson Station may not.

The two plaques accompanied the urns on Voyage 3.

I would like to formally thank Bridget Payne at the Australian Antarctic Division for all her planning. All along, Bridget has been committed to good communication with the ANARE Club and had worked extremely hard to ensure that Phil Law’s final wishes are enacted.

I also recognise that many ANARE Club members have contributed ideas and enthusiasm to this important event, and I thank you.

Most of all, I would like to recognise the efforts of Ray McMahon. He has done the majority of work from the ANARE Club perspective – organising  the second bronze plaque, writing (and agonising) over the eulogies, discussing ideas for the various ceremonies, and most of all, ensuring the whole process is handling with respect and care. Thank you!

The graves of the 3 men who died at Mawson, Robert White (1963), Ken Wilson (1972) and Geoff Cameron (1974) are on West Arm looking across to Mawson. They are very much a part of Mawson – the simple yet elegant white crosses visible against the rock of West Arm whenever you gaze out across the harbour.

Phil Law’s cairn has been built adjacent to these graves.

A team at Mawson including Jim Milne, Anne Waterhouse, Scott Hine-Hancock, and Mike Hyde, has already constructed the the cairn.

The rock was removed from the quarry downhill from the tank house at Mawson, and transported by hagglunds to West Arm. The rocks were then carried by hand for the last 100 meters over West Arm, a mammoth effort taking three days. When completed the cairn will consist of around 627 rocks (count provided by Jim Milne), most weighing between 10 to 30 kilograms.

The ANARE Club is deeply appreciative of the effort and care put in by Jim and the Mawson expeditioners and has passed on its thanks. 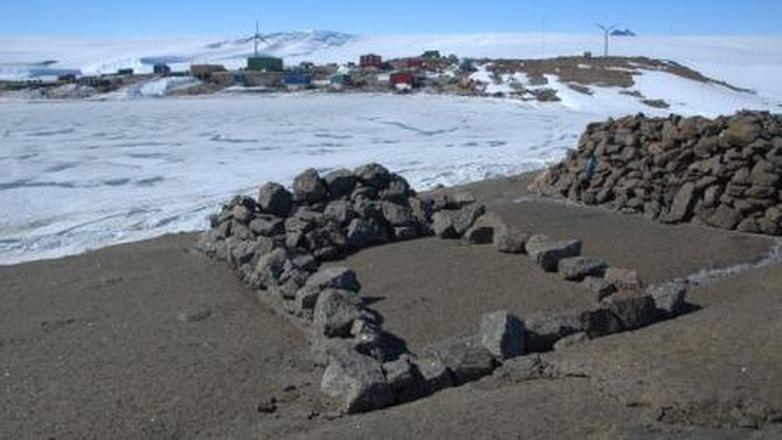 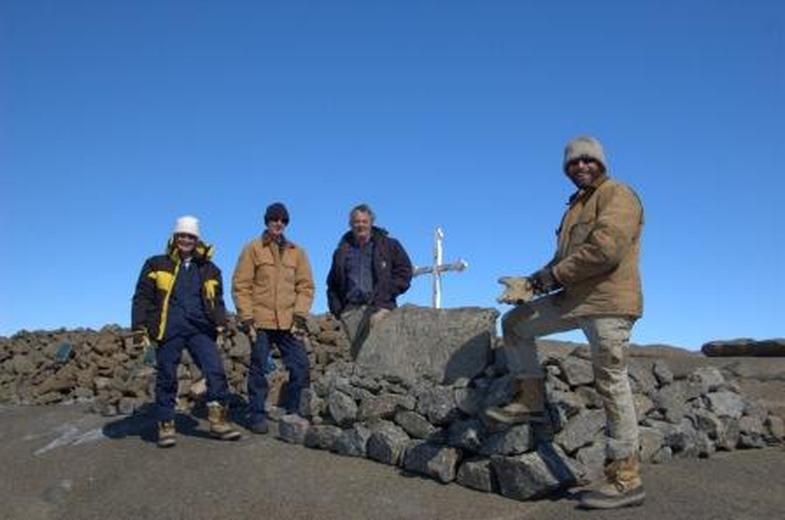 The Ceremony at Hobart Ports

Today the AURORA AUSTRALIS prepares to leave Hobart on its annual voyage to Antarctica, travelling on board I suspect will be a group of excited young men and women, some of whom will spend the following year at Mawson Station.

I would like to reflect on a similar voyage that too place some 57 years ago. It was ion the 4th of January 1954 when a group of young men set sail aboard the KISTA DAN on an adventure that would take them to the shores of the Antarctic Continent, a far away place of unknown mysteries, excitement and imminent dangers.

Also aboard the KISTA DAN was Phillip Garth Law the Director of ANARE and voyage expedition leader .This voyage was the culmination of his vision for Australia to create a permanent presence on the Antarctic Continent with the establishment of a scientific research station.

On Tuesday the 2nd of February 1954 after nearly a month on the high seas, a lookout high in the crow’s nest of the KISTA DAN sighted mountain ranges on the horizon. There appeared to be clear water between the pack-ice and these mountains and Phillip Law was elated as he is recorded as saying, ” There is nothing to stop us now in our endeavours”.

Over the next few days the KISTA DAN broke her way through heavy seaice to land a party on the rocky shore of the Antarctic Continent , and the work to build a research station began. It was on Saturday the 13th of February 1954, Phillip Law held an official flag-raising ceremony proclaiming the site to be called MAWSON station, in honour of the great Australian explorer and scientist Sir Douglas Mawson.Just 12 months ago in February 2010, Dr Phillip Law died at the age of 97 years. He had recorded in his Last Will that his cremated remains be interred alongside those of his wife Nel, beneath a stone cairn on the west arm of Horseshoe Harbour across the harbour from Mawson Station.

Today we have the opportunity to honour his request:
On behalf of Dr Phillip Garth Law’s family, his friends and colleagues and in particular the members of the ANARE Club of which he was Patron.

I would like to thank Lynn Maddock the Director of the Australian Antarctic Division represented here today by Mr Rob Wooding and the staff of the AAD here in Hobart and at Mawson Station for making this interment ceremony possible.

I appreciate the privilege offered me in transferring these urns containing the ashes of Dr Phillip Garth Law and his wife Nel Law into the safe custody of Master of the Aurora Australis CaptainScott ,the Voyage Leader Andy Chianci , the ingoing Station Leader Mark Williams, and Dr Margaret Whitelaw the ANARE Club’s representative, to be taken on board the AURORA AUSTRALIS for the voyage to their final resting place at Mawson Station in Antarctica.

A Gallery of the Ceremony at Hobart Ports 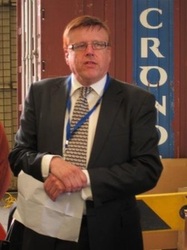 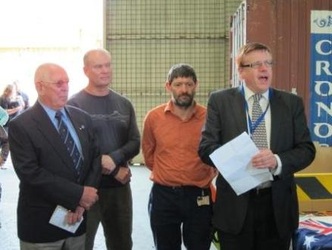 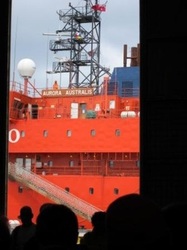 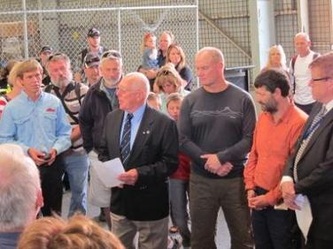 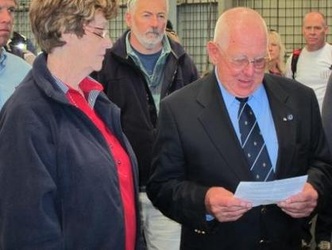 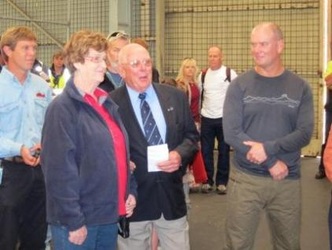 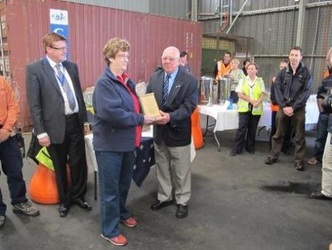 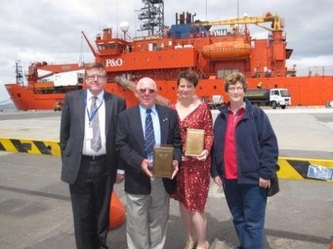 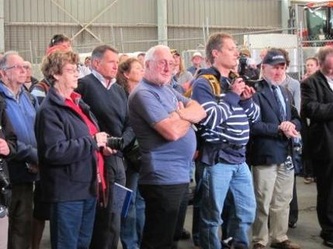 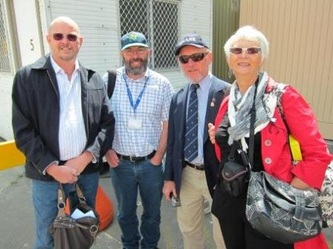 The following is an email from the 2011 Mawson Station Leader, Mark Williams, to the then President of the ANARE Club, Ingrid McGaughy.

On Sunday 19 June we interred the ashes of Phil and Nell Law in a cairn on West Arm overlooking Horseshoe Harbour.  It was a lovely day with light winds and a stunning twilight.  I have enclosed some photos for you.

The service was filmed by the MBC crew and stills were taken by Chris Wilson and Ian Phillips.

It was a whole of station affair and the urns were placed by Tim Kerr and David Morrison.

The footage and high resolution photos will be uploaded to Nisha and I understand the AAD will produce a press release.

I hope this will be a nice memorial and great memory for all ANARE members.

It was an honour for the Mawson wintering expeditioners to take part in the ceremony. 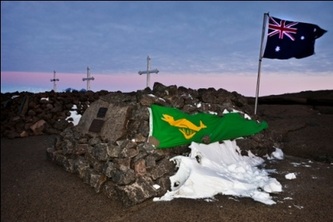 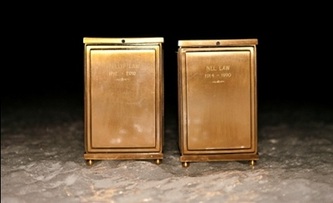 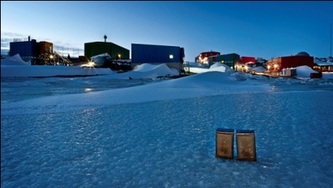 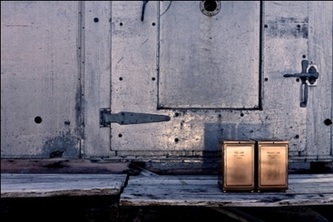 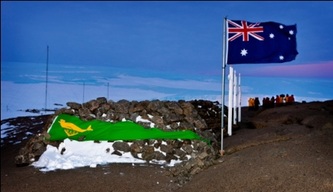 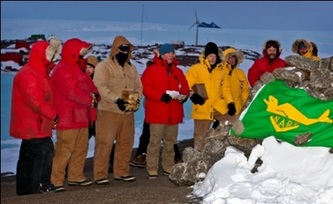 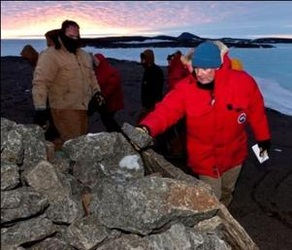 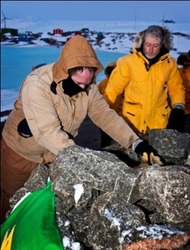 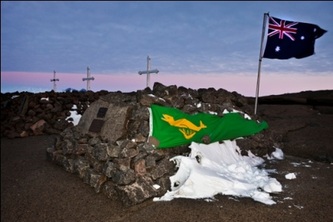 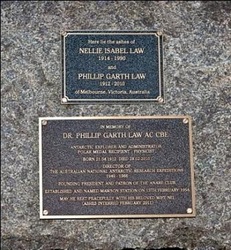 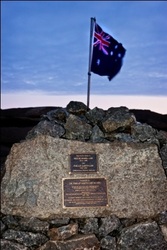 The “Handover of the Ashes”

A lot of planning has gone into the Phil and Nel Law interment at Mawson. However (probably to no-ones great surprise) once again the A (Antarctic) factor has intervened…

A lengthy fly off (34 nautical miles) due to heavy ice conditions and subsequent poor weather with several days of high winds and zero visibility hampered the ability to easily transport people and goods to and from the Aurora Australis to Mawson. V3 was the last ship into Mawson this season, and fortunately the majority of the resupply has been achieved.

Phil and Nel Laws ashes were also safely delivered and yesterday (5th March 2011) a small ceremony was held at Mawson with the ANARE Club rep Margaret Whitelaw in attendance. The formal interment did not occur due to time and weather constraints, and will be held by the Mawson wintering crew in the near future.

“…the setting was particularly beautiful, the urns sat on a table in the bay window of the upstairs lounge area with sunlight streaming into the room, wonderful views out of the windows and Alice playing her harp to one side. The urns were sitting on the ANARE flag which was draped across a white tablecloth and the urns were covered by our small Australian flag.

Jim Milne read the prepared welcome and then Jim and Mark Williams ceremoniously folded the Australian flag and put it to one side while Alice played the Antarctic piece written for her trip to Antarctica.

I then said the prayer and read the Eulogy as prepared by you Ray, Mark then read the passage from Phil’s will as a Eulogy for Nel. To finish off I read the contents of our plaque and the Ceremony  ended with Alice playing Dark Eyes.

The final interment prayer is to be said by Mark as the urns are placed into the cairn, at some future time possibly Midwinter, and all the winterers will complete the stone placement at that time…”
Margaret Whitelaw 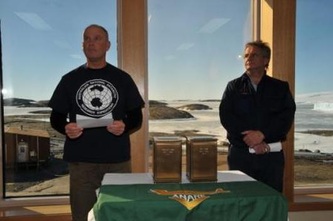 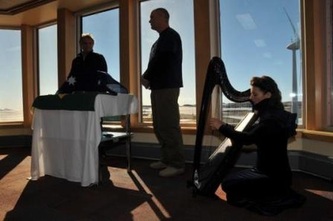 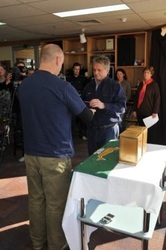 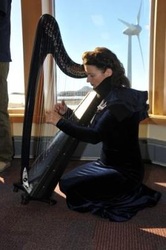 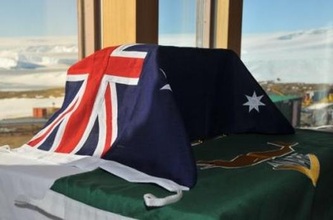 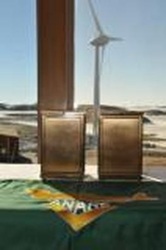 Return to Tribute to Phillip Law

Conquering the Challenges: Phillip Law and Antarctica
Scroll to top