It wasn’t the party that had been planned, Covid-19 put paid to that, but if you’ve waited 100 years, you are going to celebrate anyway. An intimate event, organised by John Russell’s daughter, Sue Morgan, and Peter Jones, President of the Deception Bay sub-branch of the RSL, launched this Antarctic legend into his next century. John arrived – quite literally wearing his Antarctic hat and Polar Medal – to cheers from his family and close friends.

The job of nightwatchman started in the afternoon at the toilet hut, known as Law Hut, named after, but certainly not by, nor in the presence of, the ANARE director, Dr Philip Law. It is worth describing this building, the only toilet for the whole station, and there is no point in avoiding details that would normally be judged unseemly: The building housed one thigh-high stainless steel urinal feeding into a 4-gallon (20 litre) kerosene tin, with a spare standing by. Then there were four toilet seats set atop 44-gallon oil drums that were largely beneath the floor. The cubicles for each of these “crappers” were generously wide and were separated by partitions that were about armpit height when one was seated. At the back of each oil drum was a 20 cm diameter stove pipe that poked out through the back wall. Outside the wall was a chimney that could be moved from stove pipe to stove pipe. Needless to say, the three pipes without the chimney were blocked off to prevent high speed drafts that may have been damaging to sensitive parts of the human body. 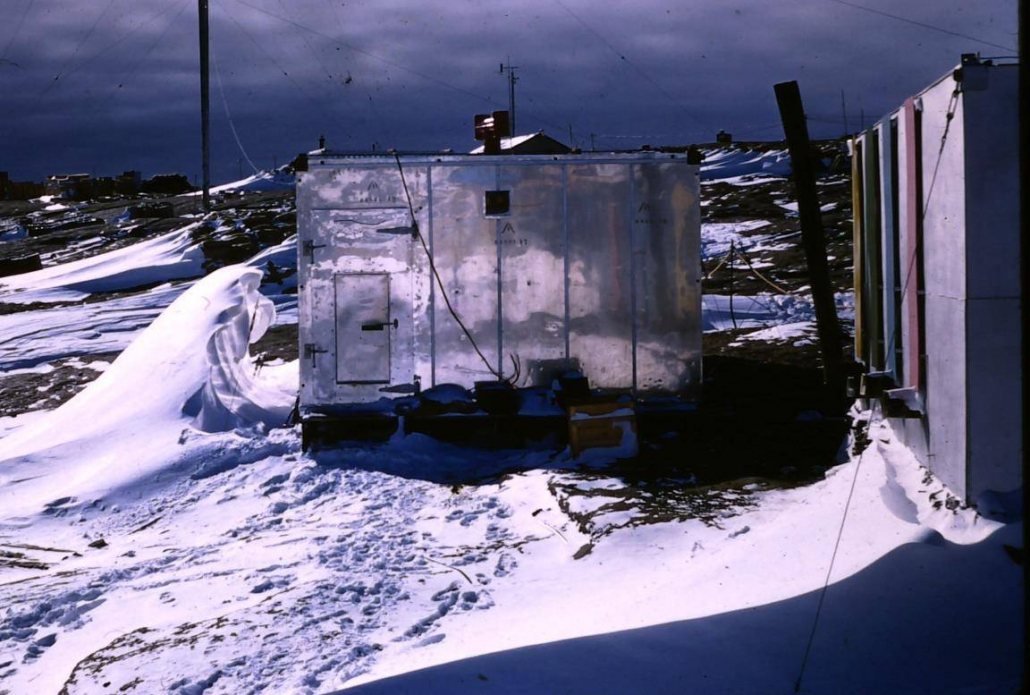 A snow drift in the lee of Balleny sleeping hut and the rear side of Law Hut with the chimney attached to the farthest stove pipe. 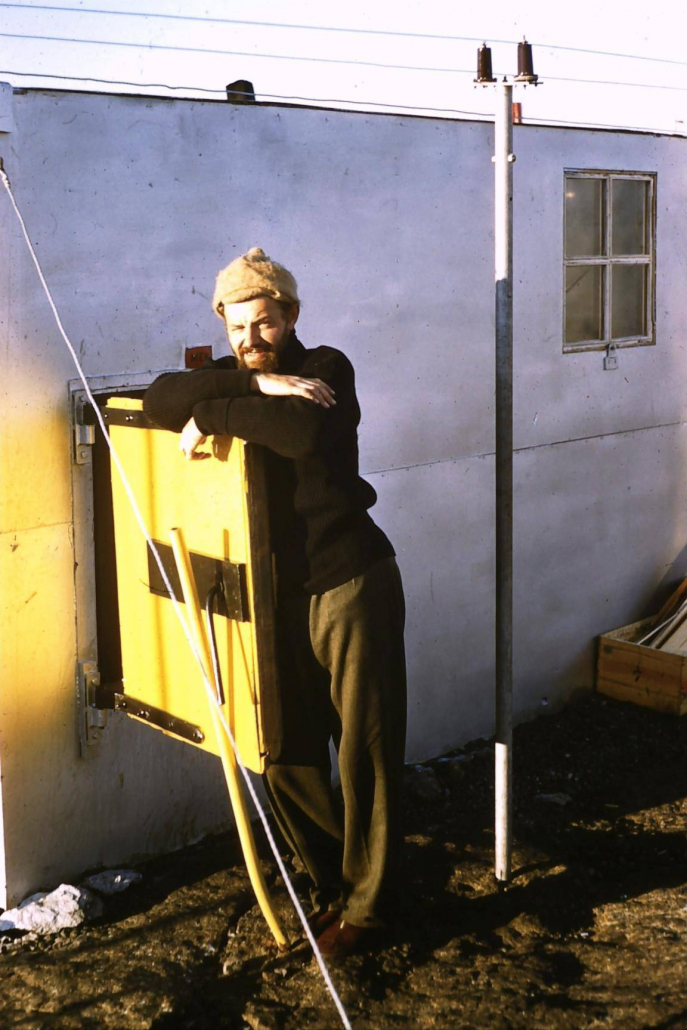 Geologist Ric Ruker at the door of Law Hut in summer.

When the nightwatchman arrived the chimney would still be attached to the crapper that the previous nightwatchman had incinerated 24 hours before. The new man would move the chimney to one of the other three stove pipes, walk inside, lift the metal lid off that crapper, and proceed to set a fire in the drum with pine packing crate wood. He would shape it as a cone, or an inverted cone. Needless to say, Law Hut was a cold and cheerless place, with cold seats, when the temperature was below freezing, let alone when it dropped to -30 C. 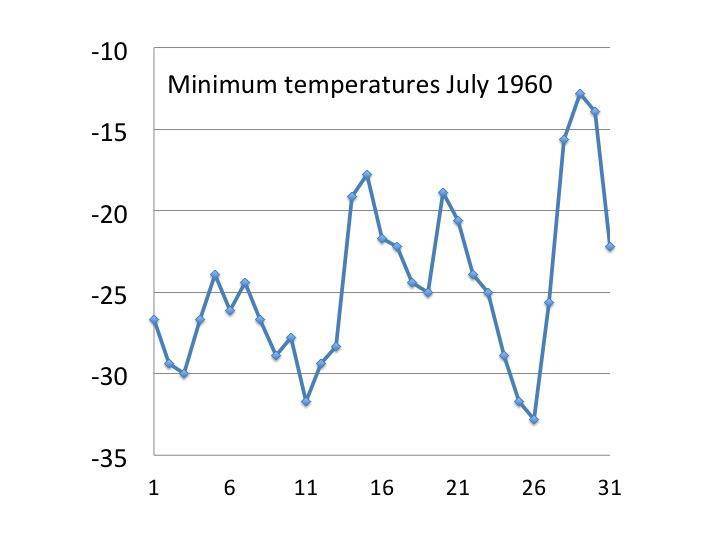 The minimum temperatures at Mawson for July 1960. Temperatures are in degrees Celsius (vertical axis) and the days of July are marked along the horizontal axis. 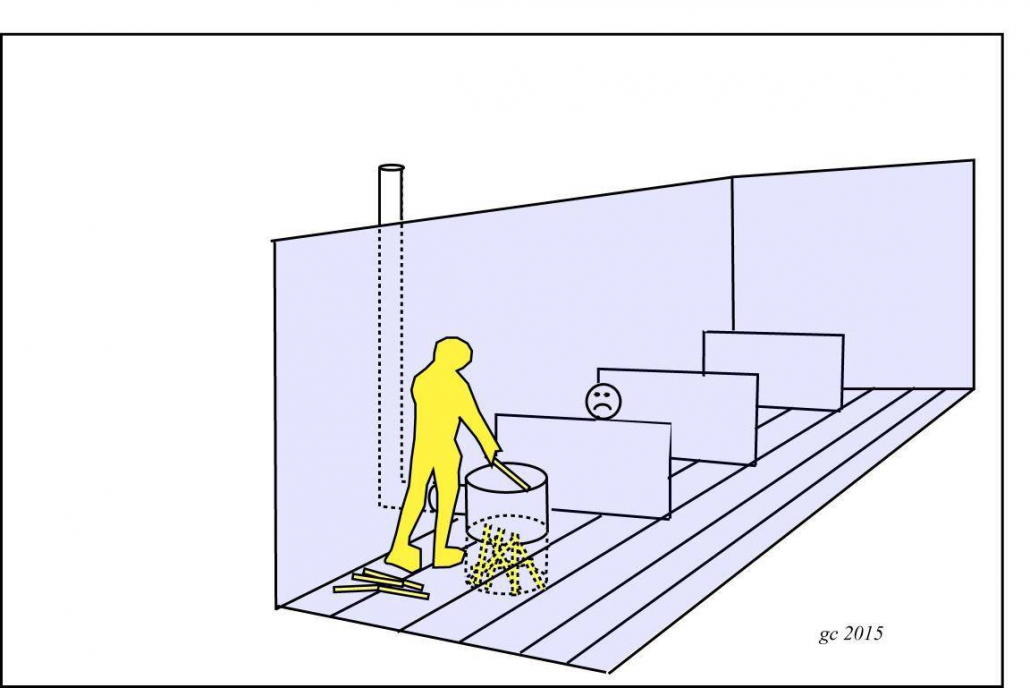 The nightwatchman making a cone of packing crate wood in a crapper that had been burnt off the night before. 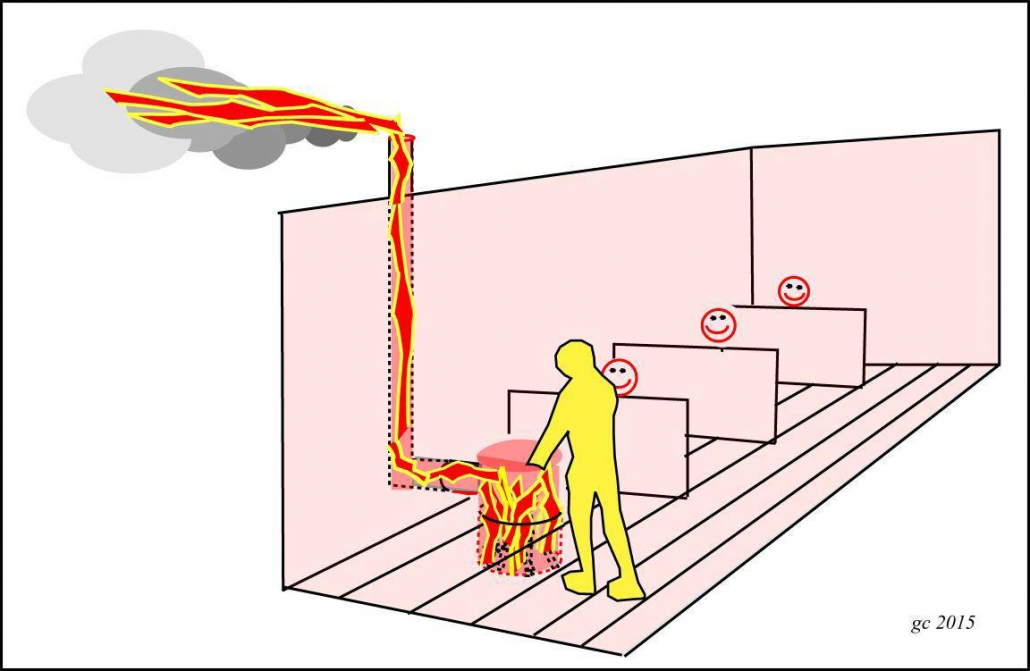 The same crapper four days later. The new nightwatchman is justifiably proud of the roaring fire in the crapper and certain expeditioners, ever alert to the possibility of a warmer seat than usual, have rushed in to take prime spots.

Putting the final touches to his cone, the nightwatch would stand up and fit it with the toilet seat.

Now it was time for pyrotechnics at the chimneyed drum: he would pour in a generous amount of dieselene, splash some onto on a wad of paper, light it, momentarily lift the lid, and toss it in. A roaring inferno would ensue. Minutes after this, the radio staff from the radio shack next door would arrive like swallows in springtine and take up residence on the three other crappers. “Why come at any other time and have to hurry because it’s bitterly cold?” they would say.

That work done he would slip and slide down the slope from Law Hut with one or two of the aforementioned 4-gallon tins from the urinal until he reached the aptly named “Piss Glacier”, where he would empty them. And it was his task to do this whenever required until 6 am, a challenging tasks during a blizzard — and particularly on Saturday “ding” nights. At the Sunday evening meetings chaired by Officer in Charge Henk Geysen, there were heated and acrimonious debates about the virtues of upright versus inverted cones — whatever Henk’s agenda may have been to start with.