A novel by Stevie Davenport 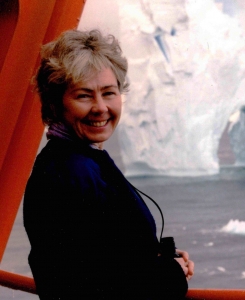 Author of “A Crack in the Ice” Stevie Davenport © Ian Helmond

Antarctica – The Perfect Place for a Murder

Available in Hobart at Fullers or the Hobart Bookshop or online from beachcomberpress@iinet.net.au RRP $25 plus $5-70 postage within Australia

The author: Stevie grew up in the Sydney bushland & the southern UK woodlands. With a passion for nature studies, adventure and messing about in boats, this led to science studies at Sydney University.

In 1980 she joined CSIRO Fisheries Division at Cronulla NSW & worked on pelagic fisheries in the Great Australian Bight, then tagging sharks off northern Australia. She moved to Hobart in 1985 with CSIRO Marine Labs. In 1990, Stevie was seconded as a fish biologist to the Australian Antarctic Division for the maiden voyage of the Aurora Australis to sub-Antarctic Heard Island; again in 1991 she worked on krill and midwater fish in Prydz Bay, Antarctica, east of Mawson.

In 1998 she began contract work including four more trips on the Aurora Australis to Antarctica, Macquarie and Heard Islands working on krill, plankton and fish; and two trips to Heard Island in early 2000s as a scientific observer on commercial fishing boats.

The inspiration for A Crack in the Ice came during work on Aurora Australis, gazing from the trawl deck across the icy seascape, Stevie yearned for a good fictional yarn set in Antarctica. It was a perfect place for a murder. 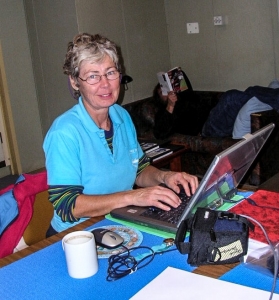 Stevie Davenport pounding the keys on her novel, “A Crack in the Ice”. © Anung Widodo

Three men and 9 dogs pulling a sled left Mawson on 15 September 1991, passing Gwamm, the David Range, where they overnighted in a hut, then Hordern Gap, and finished at the northern end of the Casey Range. The three were keen to have a few days away from the confines of the station. Simon and Paul had wintered before. Jason, a 23-yo father with a wife and 2 kids in Adelaide, had completed his first winter. He was hoping that the money he made on his year south would help pay off their mortgage.

Reaching their camp site at Casey the men partly unloaded the sled, with Simon putting up the tent and getting the choofer (cooker) going inside. Paul and Jason made a start at rigging up a dog line. The dogs had a different plan: They zoomed off with the soon-to-go-on-its-side sled. Paul and Jason raced after it and Paul managed to reach it. When he turned there was no sign of Jason and, as the incident report said, he found a hole in a snow bridge across a crevasse.

Simon and Paul yelled down the hole many times, but there was no response. Simon descended on a rope several metres into the crevasse and onto a ledge, but his calls to Jason got no response. It was too dicey to try to go further.

A SAR team in Hagglunds reached the scene many hours later. The station doctor, Kerrie, was among those who abseiled into the crevasse. Jason was dead, some 12 m down. But something was unusual about his clothing. Also, prior to all of this, Jason had reported that someone had been leaving strange messages attached to his door at Mawson.

And that is why, some weeks later, two AFP detectives, Sam and Nina, as well as Phil, an ACT police doctor, found themselves on Aurora Australis en route to Mawson. The fact that Jason was related to the Minister for Police and Emergency Services could perhaps have been a contributing factor.

The trio was helicoptered 50 km in from Aurora Australis to Mawson. They had a month there while the ship went off to do marine science. They went into the crevasse; interviewed the 22 station members; and took fingerprints. Jason’s body was unfrozen and Phil conducted a post mortem. When they had finished all that they could do, they mingled, climbed Mt Henderson, and Sam and Nina had a dog trip across the sea ice.

They had suspicions about Jason’s death, but they couldn’t prove them, and the analyses of pathology samples and the checking of fingerprints had to await the investigators’ return to Hobart.

Reviewers comment: Tasmanian author Stevie Davenport’s research for this novel cannot be faulted: If you’ve been south on Aurora Australis (or any ship); if you have spent time at one of our stations, then you will find that you are not just reading the story, you are living it. If you have been selected to go south then it’s a must-read – and I suggest getting some charts and photos of the region to help you.

The book can be bought in Hobart at Fullers or the Hobart Bookshop, or from Beachcomber Press (beachcomberpress@iinet.net.au), RRP $25.00, postage $5.70 within Australia.