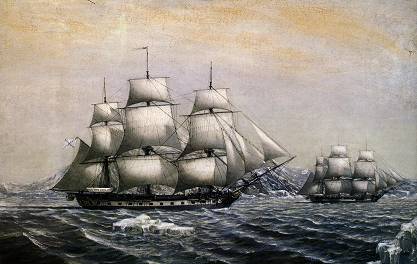 The ANARE Club and the Russian Embassy, Canberra, will co-host a Reception commemorating the 200th Anniversary of the First Russian Antarctic Expedition (Captain Faddei Faddeyevich Bellingshausen) to circumnavigate the Continent of Antarctica during 1819-1821 and the Expedition’s visit to Australia –to Sydney and to our Sub-Antarctic Macquarie Island during 1820.

The Reception is being held at the Drama Theatre, Kambri Cultural Centre, ANU on Monday evening, 30 November 2020, the day, 200 years earlier, that Captain Bellingshausen set foot on Macquarie Island.

Following in the ‘wake ‘of Cook’s Second Voyage 47 years later, Captain Bellingshausen in his ships Vostok and Mirny was the first to sight the Continent on 27 January 1820. Bellingshausen’s contribution to the exploration and discovery of the Continent, and his observations in terms of his visits to Sydney (two occasions) and to Australia’s Sub-Antarctic Island, Macquarie Island, are of great scientific and historical value.

During the Reception there will be an exhibition of Pictures from the Official Atlas of the Expedition, especially sent from the Russian State Historical Museum. Moscow; the unveiling of a commemorative plaque and the display of an original silver medal minted in 1819 for the Voyage, believed to be given to the King of Tahiti in July 1820.Video teleconference links have been arranged with Australia’s Macquarie Island and Russia’s Continental Station,  Progress, close to Australia’s Davis Station. Australia Post has recognised the significance of this anniversary event by the release a Bellingshausen Pre Paid envelope.

Full story and pictures will appear in the forthcoming Aurora

When We Were Young
Scroll to top