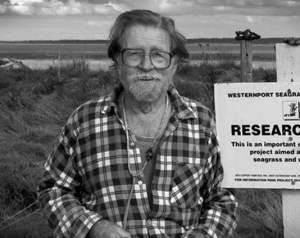 Eric Herbert Mitchell ‘Tim’ Ealey was an Australian biologist, known for his contributions to science, the environment and conservation awareness and was the recipient of an Order of Australia.

Ealey wintered on Heard Island in 1949 as a biologist for 14 months doing a survey of the island’s wildlife, and worked for the Antarctic Division in the 1950s. He circumnavigated the Antarctic in the research vessel Discovery 2 conducting marine research, a voyage that lasted 7 months. He received the Antarctic Medal, and Ealey Glacier on Heard was named in his honour.

From his time down south, Tim recalls the following experiences:
“Coming home (on the Discovery 2) was probably the most dangerous period. We had a few serious scrapes against icebergs, glaciers and cliffs during rough weather. We were nearly wrecked in the Ross Sea! Another dangerous moment was (on Heard Island) when I turned my back on a large male elephant seal and turned around just in time to see its tusks coming down upon me! I dived away just in time”.

Max Downes, biologist on Heard Island in 1951, recalls meeting Tim:
“I first heard of ANARE in 1947 when our physics lecturer at Melbourne University, Phil Law, announced during his lecture that he was leaving to go to the Antarctic. During my years at University, I had spent any spare time foraging in the special library located in the basement of the old Zoology building.  I remember being very impressed
by Robert Falla’s report on the birds of the 1929 BANZARE expedition”.

“In late 1950 I was interviewed by Phil Law as to my suitability for Antarctic work; to be one of two biologists on the 1951 ANARE expedition. In early 1951, before leaving for Heard Island, I met Tim Ealey and his predecessor Ron Kenny, both responsible for formulating early ANARE biology work. The 1951-52 biology program at Heard Island by Ken Brown and myself was a follow-up to programs carried out by Tim Ealey and R.G. Chittleborough
in previous years. The field notes recorded on the Island by Ealey and Chittleborough were essential preparation for carrying out the biology program of those early years”.

In 1961 Tim was one of the founder members of the Biology Department at Monash University teaching ecology, where he completed his PhD on a study of kangaroos in the desert interior. He was involved in biological and educational projects in Papua New Guinea, Malaysia and Thailand, receiving international recognition for his works and nationally acknowledged for a program that involved schools in rehabilitation of the environment, particularly mangroves.

Ealey was commemorated in the name of a tiny marsupial, Ningaui timealeyi, he discovered in the Pilbara region of Western Australia. He worked closely with Aboriginal groups in their fight for land rights. He also worked on the monotreme family of Tachyglossidae, the echidnas. He is survived by his wife Laura and daughters Jenny and Wendy.

Anung Widodo A Crack in the Ice
Scroll to top