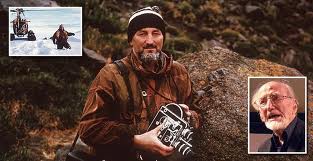 I was a member of the 1962/3 ANARE summer expedition to Heard Island when there were three of us, Budd (leader), Stephenson (geologist) and myself( assistant scientist (climber handy man preferred !) We attempted to summit Mawson peak on Big Ben (named by Bob Dovers, son of one of Mawson surveyors.) We failed due to the weather and also the fact that we had scientific gear where food would have been more acceptable, but then science was our task. We enjoyed a’ tribulation’ Age and the SMH reported us front page missing etc.

So in 1964 I decided to try a return match privately. I approached Phil for ideas  and he suggested the vessel that we eventually did use, The Patanella, which he had allowed to sail to Macquarie Island to research elephant seal harvesting. She was excellent.

During the planning I received a letter from Garfield Barwick minister for External Affairs, indicating  that we could not visit Heard. Legal opinion indicated that at that time we could. In the back ground were two ‘Missing Link’s a Legal QC and very quietly (I am sure) Phil.

We went and we succeeded, end of story.

Phil was heart and soul for such private enterprise and I am sure heated a few telephones, unofficially on our behalf.

In 1963 at Spit Bay Phil, movie camera and all, was swept off the bologny boat into the sea. Of course he survived .

I have copied in Grahame Budd a member of the 64/5 sailing trip, Grahame was i/c of the science programme.

I believe that the South Indian Ocean Expediton to Heard Island somewhat sailed in the wake of Mawson, however in our case we were purely private,
Government in this case presenting just another problem to be overcome… 6 of the crew were ‘sharp  ANARE’s.’

When I first joined ANARE in about December 1962 Phil’ since he knew I kicked off the Outward Bound school in OZ and had been in the Brit’ SAS invited me to take some PT classes!

I didn’t know much about that so cooked up a few simple and easy jinks for the lads and off we went. I was flummoxed when no less than three withdrew sick, in one case as in vomiting. Yes in those days enjoyed PM was the 6 o’ clock swill at the local pub,a clue ? It came to my mind that a bloke expert say in diesel motors hardly has to be some sort of fitness freak.

However having started as a royal Marine Commando in WW2 I was trained in Cliff and shore assault methods. As I watched two men fumbling with two brand new rolls of Hessian rope, needed to pull in the inflated barge after Graham and I landed(in an 8 foot plywood dinghy ( in fact capsized) on long Beach (very BRRR !) I concluded that ANARE might benefit from some extra inputs of ideas.

No more need be said and for sure there have been changes. I had also received vital training in the weather at Heard and the Heard brand of Sods Law, the prime element in all planning in wild places.
Many years later Phil appeared at our house on the Blackall range North of Brisbane. After lunch he went on to Flaxton to see Syd Kirkby there.

Phil boasted that he had driven from Melbourne to Queensland in one bash. When I walked down the road as he had called on mobile that he could not find us, I waited while he opened a window when a cloud of cigar smoke emitted. Talk about Green House! Phew.

We thought that at his age this was not a very good idea, but then Phil was always convinced that he was close to 21? He was in mind for sure.