The Polar Medal was instituted in 1904 by in the UK by King Edward VII to recognize distinguished service in the Arctic and Antarctic.

The Polar Medal is awarded only for ‘extreme human endeavour against the appalling weather and conditions that exist in the Arctic and Antarctic.’

Further to 1958 it was not until 1969 that the Polar Medal was awarded to 58 ANARE expeditioners for distinguished service during the years 1959 to 1967.

The medal is a silver octagon suspended from a plain white moiré ribbon. The obverse is the head of the reigning monarch and the reverse shows the RSS Discovery with a sledging party in the foreground. 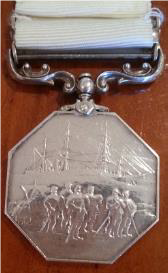