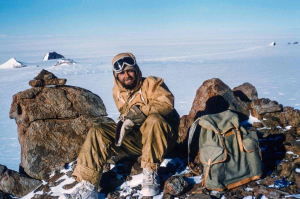 Ian McLeod passed away peacefully on Saturday 12 September in Canberra with his wife Bev and daughter Jenny beside him. He was 89.

Ian wintered at Mawson in 1958 as a geologist/glaciologist and was awarded the Polar Medal in 1961, the MBE in 1966 on the recommendation of Phil Law, and the Russians awarded him the Bellingshausen Medal for his work in Antarctica. He contributed to the Mawson 65th Anniversary Brochure in 2019 with detailed accounts of ANARE’s early geology exploration, proof reading the document, and recording his own Antarctic experience in a personal biography as follows.:

“I bushwalked extensively in then untracked places while at university, then spent two years on mineral exploration in a remote part of central Australia. Antarctica called because it was largely unknown and quite different to anything I was likely to otherwise experience. Highlights of my year were sledging 650 km from Amundsen Bay to Mawson with two good companions; and earlier, when flying south for 400 km along it, the unfolding panorama of the Lambert Glacier and its huge western tributaries. On returning to Australia I remained with the Bureau of Mineral Resources, working mainly on compilation, analysis and publication of information on the Australian mineral industry and mineral resources, but continued my Antarctic interest for many years with five summer returns for geology work, and membership of national and international committees on Antarctic geology.’

During the summer trip of 1960 in the Magga Dan with Phil Law, Ian was in a Hillier’s 12C helicopter 100 km west of Wilkes station approaching a rocky outcrop near the Vanderford Glacier, when the chopper lost power and crashed onto the top of the ice cliffs. Neither the pilot nor passengers were badly injured, and it took 3 hours to rescue the men.

The early work of geologists like Ian McLeod and Peter Crohn (M55,56 who discovered the 300 million-year-old coal seams at Beaver Lake) gathered evidence to support the theory of continental drift.

Dr Des Lugg (former head of Polar Medicine at the AAD, 1968-2001) and leader of the Prince Charles Mountains summer programme based at Moore Pyramid in 1969/70 remembers Ian as a meticulous field expeditioner who worked as a roving geologist that summer, exploring rocky outcrops and supporting the running of the field camp.

Within the Bureau of Mineral Resources, Ian was mentor to many young geologists who ventured south, including Bob Tingey who went on to edit “The Geology of Antarctica”, published in 1991, – a foundation work on the continent’s geology.

An interview of Ian by Ingrid McGaughey can be found on the State Library of New South Wales website at: