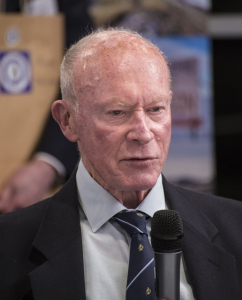 John joined the Australian National Antarctic Research Expeditions division in September 1956 and was at Macquarie Island from December 1956 until the end of 1957. He carried out observations of various kinds on the aurora and made measurements of atmospheric ozone for the CSIRO, having set up the first ozone spectrophotometer to be taken south from Australia. John was asked in mid 1958 to be a member of the first Australian party at Wilkes Station, Antarctica during 1959. At Wilkes he was again involved with observations of auroral events and also with some glaciological observation work on the measurement device movement and accumulation. These experiences remained treasured through his life and we know he would want his thanks and best wishes conveyed to his fellow expeditioners.

A service to celebrate the life of John Denholm will be held on Thursday 29 September 2022 at Le Pine Ivanhoe, Victoria commencing at 10:00am. Livestream Link available for those unable to attend: https://view.oneroomstreaming.com/authorise.php?k=1663700519209263