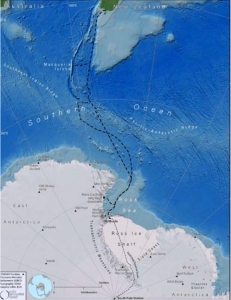 A possible route for a NZ-McMurdo fibre link

New Zealand may beat Australia to the punch on connecting an undersea fibre optic cable to Antarctica following a clear endorsement from a peak US scientific body.
A US National Science Foundation group has examined the value and feasibility of deploying a new submarine cable connecting NZ South Island to the US operated McMurdo Station to address the severe network bandwidth bottlenecks that currently constrain scientific research in Antarctica.
The proposal also calls for branching units which could service Australian Antarctic facilities and potentially even a second link to Perth.
A workshop of scientists with a focus on Antarctica has: “Identified no significant obstacles to, and great enthusiasm for, supporting the construction of a new cable to McMurdo. New Zealand would be the most likely appropriate endpoint, but Australia is also a possibility. Connectivity from McMurdo could trivially be extended to New Zealand’s adjacent Scott Base.” McMurdo is the US base on the shore of Antarctica and is located closer, by longitude, to New Zealand than Australia.
According to a paper released from the workshop, NSF’s Of􀏐ice of Polar Programs is investigating the feasibility of constructing a cable between New Zealand and McMurdo Station with terabit-scale networking interconnections at low latencies estimated 45 ms to New Zealand.
The cable infrastructure could also serve as a scientific instrument platform, for example observing ocean conditions and seismic activity along the cable path.
With the weight of the US science establishment, a NZ cable may have stolen a march on similar proposals for an Australian cable, proposed earlier this year by Geoscience Australia and the Bureau of Meteorology.
In a submission to the Federal Inquiry into the availability and access to enabling communications infrastructure in Australia’s external territories,
Geoscience Australia called on the federal government to fund an engineering study to investigate the viability of establishing an undersea cable from Australia to Antarctica. It believes that such a cable could even facilitate the development of an Antarctic space park, which could be funded by government.
The Bureau of Meteorology also recommended an investigation into the feasibility of establishing an intercontinental and intracontinental fibre optic cable technology and infrastructure to permanent Antarctic research stations Davis, Casey, Mawson, Macquarie Island from the Australian continent. “An intercontinental submarine fibre optic cable from Australia to the Antarctic continent would establish a reliable, high bandwidth, low latency communication service to Australian research stations for the next 25 years and beyond as a long-term communications plan,” it said.
Both submissions were made in February but the committee, which was convened over a year ago, has yet to hold one public hearing.
By contrast, the US NSF convened a three day workshop with nearly 140 participants which generated a 138 page action plan last month. They are already planning for next steps beyond an initial New Zealand to Antarctica link.
“Workshop participants envisioned leveraging a McMurdo fibre link for follow-on communication infrastructure projects to create new opportunities to connect field research sites by wireless or direct-fibre connections. Such future intra-Antarctic networks enabled by a McMurdo fibre link could be based on emerging satellite systems that will provide polar coverage, perhaps augmented with a direct fibre-optic link between McMurdo and Amundsen-Scott South Pole Station,” said the NSF report.
“These intra-Antarctic networks would enable substantial improvements to connectivity to South Pole research facilities that generate massive and growing amounts of data that can now only be shared by siphoned satellite uplink or physical transport of storage media during the Antarctic summer.”
Scientists estimate multi-terabit requirements for Antarctica including seismic, oceanic and astronomical data. The proposed cable would have a sensing capability.
The US proposal would provide for a branching unit which could connect Australia’s Macquarie Island to the system. The advantages of a NZ system is that it would connect at South Island to the proposed new Hawaiki cable there connecting to Australia and the US as well as the proposed NZ-Chile Humboldt cable.
The NSF report also floated the possibility of a second cable connecting McMurdo station to Perth, Australia.
“Additional routes could also connect McMurdo Station to Perth in Australia. Branching units may be installed to provide connectivity to locations elsewhere on the continent, including sites such as Davis and Mawson. An additional path to Perth would provide resilient connectivity out of Antarctica. Access to the global Research and Education networks is readily available from New Zealand or Australia or both. Commodity (commercial) Internet access is also available from both locations.”
Grahame Lynch 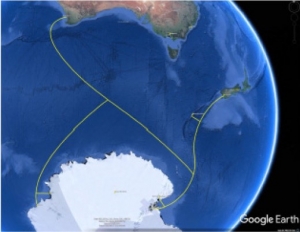 A possible 2nd route to Perth