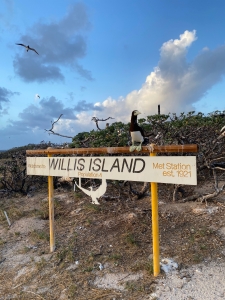 During the course of a recent conversation with Dr John Zillman (former Director of Meteorology 1978-2003), about the Bureau of Meteorology’s contribution to the proud history of the forthcoming 75th anniversary of ANARE (1947-2022), I was reminded about the unique and imminent 100th Antarctic Anniversary connection with the establishment of Willis Island Meteorological Station on 7 November 1921 by Captain John King Davis (1884 1967).

Captain Davis, remembered as the Captain of the Aurora and for his remarkable involvement in the expeditions of Ernest Shackleton and Douglas Mawson, and as the then Commonwealth Director of Navigation in 1921, agitated for the establishment of a storm warning wireless Station on the Island. With the danger of the project being shelved, Davis volunteered to man the Station and conduct meteorological observations which have continued to this day.

The Station in its early years was managed by the Postmaster-General’s Department (PMG), then AWA and OTC, before being taken over by the Bureau in 1966, although Bureau observers had manned the Station in 1939. Accommodation on the Island has greatly improved from the primitive shack to modern day air-conditioned office and living quarters. The station was manned throughout  WWII and today has lived up to its original important siting for the detection and tracking of tropical cyclones and marine forecasts,  Of interest , the Island station is located within Australia’s Coral Sea Island External Territory, some 450 kms off the Queensland coast from Cairns.

The Antarctic association with the Island would continue with the establishment of our Post World War II Antarctic stations- Heard Island (1947) and Macquarie Island (1948) and our continental stations of Mawson. Casey and Davis, with many Antarctic met observers preferring to ‘chill out’ on the Island after serving down South. In 1947 Paul Ruckert served at Willis and would serve with the Bureau on Macquarie Island 10 years later. With the opening of Davis Station in 1957, the Station Leader Bob Dingle would go on to make many trips to Willis Island in between his Antarctic services.

Denise Allen became the first woman to serve at Willis in 1983. Denise recalls that she was flown out to the Island in a seaplane from Townsville about a month after the changeover and was met on the beach by three male colleagues. She remembered thinking to herself, ‘what had she done in arriving at such a remote posting’. The posting proved to be a successful one and paved the way for future posting of women observers to remote stations, including Antarctica. Interestingly, during this anniversary weekend, an observer who has just served at Willis Island is on her way to join the Meteorological team at Davis.