At Mawson in 1958, Saturday night was film night. The usual format was a serial followed by the main film. Each episode of the serial was part of the classic film of the Raymond Chandler detective novel The Lady in the Lake. Bruce Cook, the projectionist, had shown the film at Macquarie Island in 1956, so knew exactly where to cut off each episode to create the maximum suspense and anticipation for the next episode. The main films were a mixed lot; they included pre-World War II classics such as The Private Lives of Henry VIII, Elizabeth Taylor aged 11 or 12 in National Velvet, and the British wartime film Mrs Miniver, as well as some eminently forgettable ones. 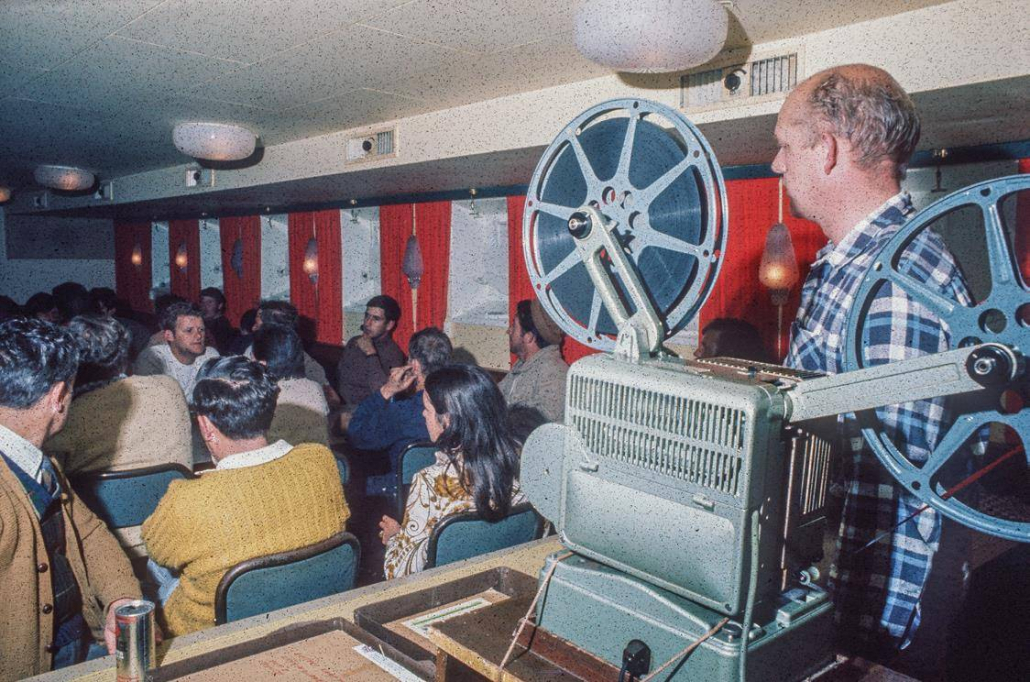 Film night on board the Nella Dan, 1971 with projectionist, Peter Granholm, First Officer of the Nella Dan. © AAD by Jutta Hosel 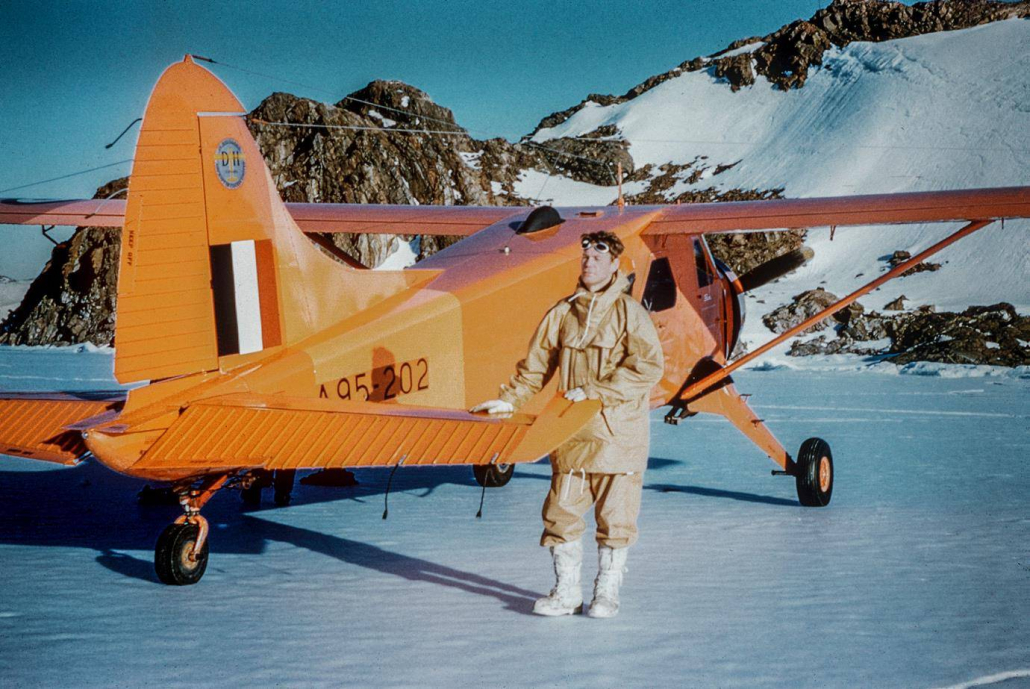 Hugh (‘Bill’) Wilson, RAAF pilot with the Beaver aircraft, probably at McLeod Nunataks.
He was the ‘suspected’ author of “THE MAWSON MAIZE”. © AAD by Eric Burnett

The films were 16mm, so each consisted of several reels. While the reels were changed, the audience took the opportunity to get another beer – or get rid of what had already been drunk! At one of these intervals early in the year someone discovered a type written sheet on the notice board in the adjacent mess. It was headed MAWSON MAIZE and contained short items, commenting on or alluding to recent events at the station. Suspicion immediately fell on ‘Bill’ Wilson, one of the RAAF pilots, who had worked as a reporter on the Alice Springs newspaper before joining the RAAF, but Bill refused to accept responsibility.

Someone took the sheet and interest waned until another sheet appeared the following Saturday night. The Saturday night after that saw a rush to the mess at the first interval and sure enough there was another issue. This became the pattern; the MAWSON MAIZE was regular and it became a sought-after collectors’ item. The contents ranged from one sentence aphorisms, through paragraphs commenting on some event, to clever verses. Several issues ended with a topical letter from ‘Joe Blow’. These were written in a breathless ‘stream-of-consciousness’ style with long unpunctuated paragraphs. Most items would be meaningless to anyone not knowing the background, but they were very amusing to us at the time. (See p18, Aurora September 2004).

Then Jocelyn Terry**, on her Radio Australia “Calling Antarctica” program one Friday, referred to the Mawson Maize and said that she would like to see a copy when we returned to Australia. This caused some consternation. The contents would hardly rate PGR nowadays, but some topics or words were not talked about then in the presence of ladies. However, the author rose to the challenge and no-one could have taken exception to the contents of the next issue, which was eventually passed on to Jocelyn.

It was soon established that the typing was done on the OIC’s typewriter (there weren’t many on the station); Ian Adams, the OIC, remarked that he stayed away from his office on Saturday afternoons. Anyone determined to discover the author could have done it easily by hiding in the mess or watching the OIC’s office. If someone did so, they didn’t broadcast their knowledge. Most of the party preferred to keep the mystery going. A couple of people at least would have been let into the secret. An issue appeared while Bill was away, which revived conjecture about the author. Another issue had some illustrations in the unmistakable style of another party member, but he too turned the question aside.

Some noted that Bill never actually denied responsibility but always turned the accusations aside, and as the year went on, it was generally believed that he was the author. However, the tantalising doubt remained. It was not until the voyage home that he admitted that he was responsible. The whole episode was one of the intangibles that helped maintain the morale of the party.

Sadly, Bill was killed in an aircraft crash soon after returning to Australia, but members of the 1958 Mawson party will always have fond memories of his light-hearted journalism and the entertainment it gave to us for much of the year. 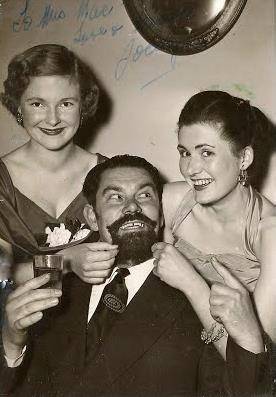 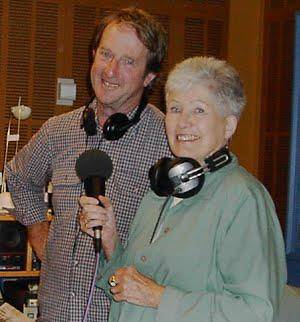 Joselyn with “Macca” (Ian MacNamara) in the ABC Studios, Sydney 2005, for the radio feature on Wilkes station re-union. (Sourced from ABC Archives from the internet.)

* The title “THE MAWSON MAIZE” was not always the same. One issue was “THE
MAWSON HAZE” and others may have been “THE MAWSON MAZE”. (Story © Ian McLeod)

Sadly, Jocelyn died on 21 October 2007. As John ‘Snow” Williams wrote in her obituary (Aurora vol 2, December 2007, page 29) “She has a place in our hearts and a name on the maps ‘Jocelyn Islands’ about one and a half miles NNE of Mawson, bear her name. Jocelyn Terry was and is a well-loved part of ANARE.” 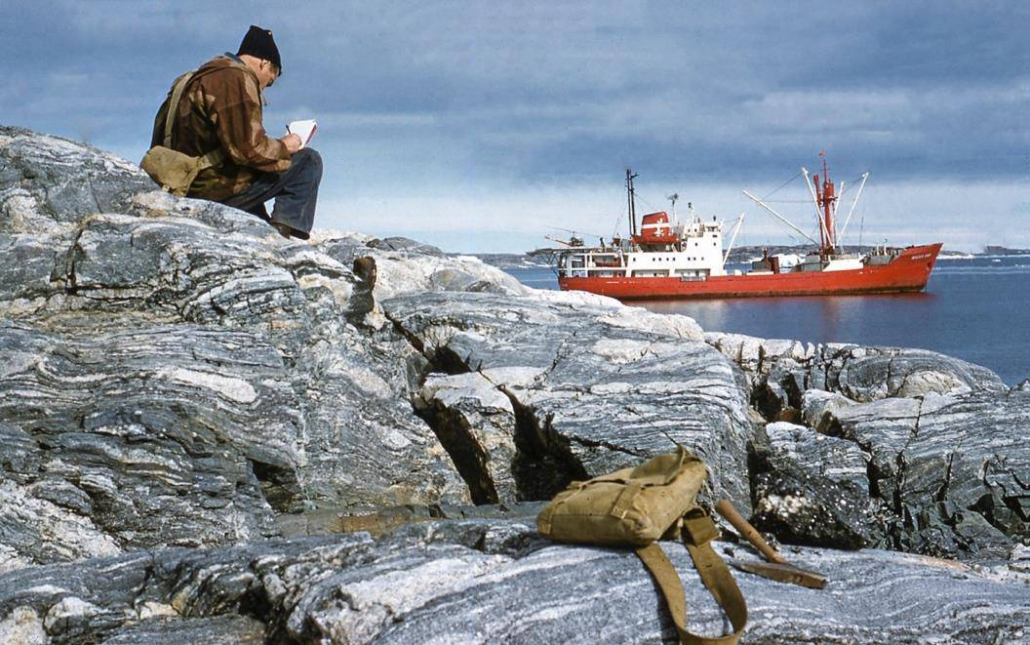 Ian McLeod at Wilkes with Magga Dan in background. Ian was the geologist at Mawson in 1958 & carried out exploration in the Prince Charles Mountains, returning for the summers of 68/69, and 69/70.
© Geoscience Australia from AAD by Bruce Stinear (Geologist M54,57,59) 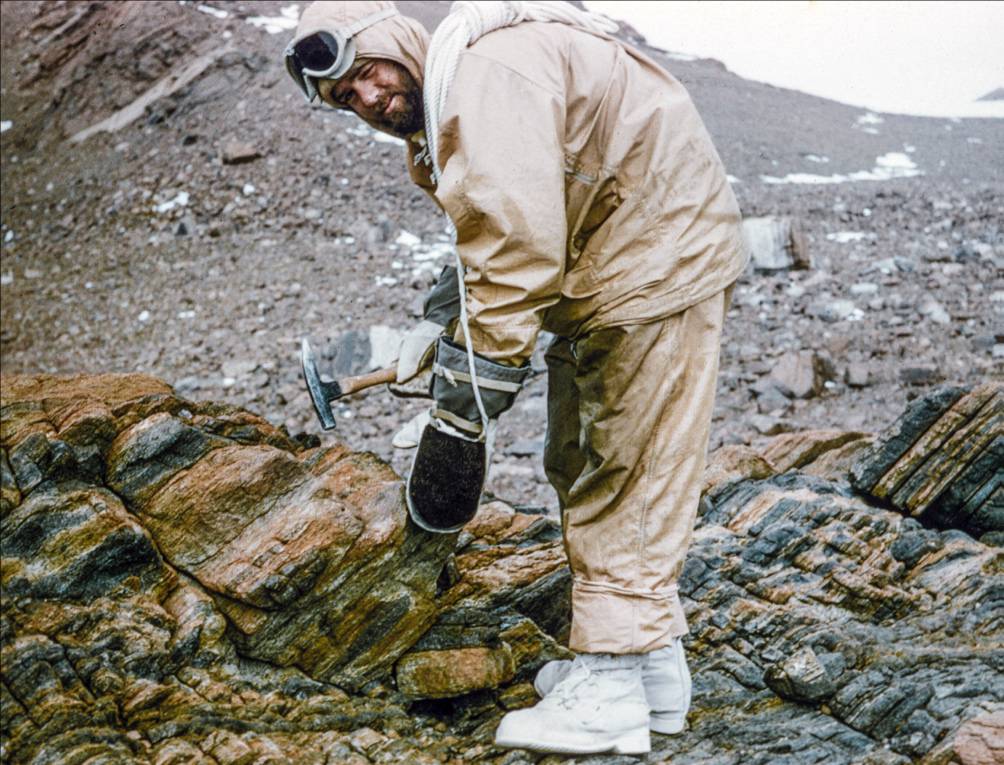