Roland was a former Chief Engineer with the Australian Road Research Board (ARRB) and his contribution to ANARE was as the ASP Electronic Engineer at Davis in 1996, and to the Club as Treasurer for the past eleven months. He passed away on 8th July 2015 after a long illness.

Roland succeeded Assoc. Prof. Kirstie Fryirs as Treasurer at the 2014 Annual General Meeting but soon after underwent major surgery and from that time on his health deteriorated rapidly. Despite his failing health, he continued to discharge his duties as treasurer right up until the time of his death. His last official appearance with the Club was at the Meeting of National Council on 24th May. Prior to that he and his wife, Chris, had attended the briefing provided to the Council by the AAD in Hobart on May 8th, and they had a short holiday in Tasmania after that meeting. 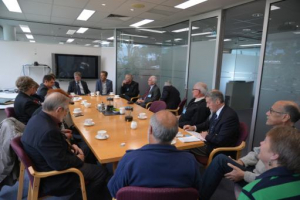 Meeting with the AAD, May 8th. Chris and Roland are in the bottom right hand corner

To me, Roland was an ideal member of National Council. His contributions were measured, considered and well-presented and he was thoroughly professional in everything he undertook. He was a pleasure to work with and was utterly reliable. He had a quiet, almost scholarly demeanour and could be relied upon in every respect. He was in every way a perfect gentleman and he will be sorely missed.

National Council extends it sympathy to Chris, and to his family. Joe Johnson. 10 Jul 2015