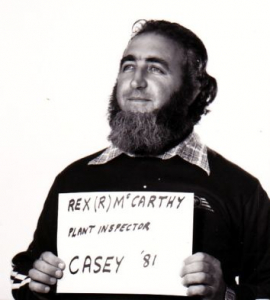 Rex McCarthy died suddenly on 10th September 2013 at the age of 67. He is survived by his wife of nearly forty years, Loretta. Regrettably, none of his fellow expeditioners knew of his death until now.

A large man, known to all his fellow expeditioners as the “Bionic Bubble” or “Rexus Maximus” he was also known for tipping the garbage trailer o 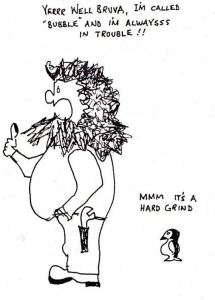 ver ” more than once â” which led to the phrase “doing a Rex” when anyone else had a similar misfortune. He was also known for his habit of calling everyone “brother” and for describing work as a “grind”. The station magazine for the year carried the caricature below:

Rex and Loretta were regular attendees the Casey Re-unions, which were held every five years. They will both be missed at next year’s 35th Anniversary in Darwin.
Received from Joe Johnson 1981