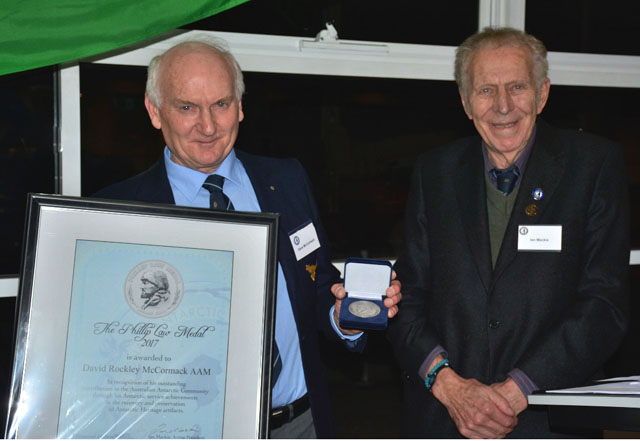 Presentation of the Phillip Law Medal

It is my pleasure on behalf of the ANARE Club National Council to announce the Award of the 2017 Phillip Law Medal to David Rockley McCormack AAM in recognition of his outstanding contribution to the Australian Antarctic Community through his Antarctic service achievements in the recovery and preservation of Antarctic Heritage artifacts.

Dave McCormack has wintered six times; at Casey 1972 and Mawson 1974 as Senior Diesel Mechanic
and again at Mawson 1978, 1983, 1986 and 1988 as Plant Inspector. Following on from his last winter, Dave was employed for several years by the Antarctic Division as Senior Plant Inspector and acted as the Supervisor of the Mechanical Section. He has accompanied round trip voyages during most seasons as Senior Mechanic/Barge Driver. Since his recent retirement, he has been employed by the Antarctic Division as a contractor providing logistic/mechanical support on round trip voyages and training expedition staff.

Dave is passionate about the history of Antarctic exploration and ANARE in particular. He has been personally responsible for the recovery from Antarctica of a number of ANARE artifacts over the years and the restoration of a number of items of mechanical equipment. After station changeover in 1988/89, Dave volunteered to stay on during the second summer for field work. This involved returning traverse vehicles from Dovers summer base in the Northern Prince Charles Mountains to Mawson, the discovery and recovery of Bob Doversâ€™ â€œ50 Mile Depotâ€, the removal of the â€œRussian Fuel Dumpâ€ near Guam, the cleanup of the fuel and supply dump at â€œHenderson Depotâ€, and the recovery of the â€œBarge Caravanâ€ from Fischer Nunatak where it was used as a remote weather station in 1954. Dave was the driving force behind these cleanup and recovery operations.

I am sure you will join with the Council and Members of the ANARE Club in congratulating Dave on this timely recognition.

Thank you Ian for your kind words of introduction. It is a very great privilege to be honoured with this Phillip Law medal and I sincerely thank those who were involved in my nomination. I have always had a passion for the preservation of our Antarctic Heritage and I appreciate this has been recognised by the ANARE Club.

Like many of us here,I didn’t know Phillip Law personally, however I used to attend the Melbourne Mid winter dinners to hear him speak. A highlight was always the few jokes he’d come up with towards the end of his speech. Some were a little bawdy and probably wouldn’t go down well in tonights company ! However, they were very entertaining !!

During the years I was involved with the Jubilee restoration work, I’d sit down with him and talk about Weasels and early mechanical gear at Mawson. The following year at the Melbourne MW Dinner, on sitting down beside him during a break in proceedings, he looked at me and said “Ah, the tractor man”. He must have mistaken me for someone else as I only ever talked to him about Weasels.

I wrote Phil a letter in early 1987 in support of his attempts to gather interest in a National Antarctic Museum and expressed my enthusiasm and also touched on artifacts worthy of saving etc. He replied to my letter and I’ll just quote the first paragraph here which was quite poignant and he said:-

“Dear Dave,
It did my heart good to read your enthusiastic letter. I am afraid such enthusiasm is largely limited to expedition personnel – the civil servants in the bureaucracy tend to sneer at such sentiments”.

Well here we are 30 years on down the track and nothing has changed !!

He tried very hard but to no avail but then again , Phil was hardened to dealing with such people. We can only hope that something comes to fruition with the Macquarie Point project supposedly underway across the harbour. We have some strong support for this in Dr. Bill Burch from Sydney among others.

Phillip Law was a visionary with very high ideals and a finite agenda and we all owe the opportunity we have had to realise our ambitions South , to him – for he was the driving force to establish our antarctic stations. I know I shall be eternally grateful as it set my life on a definite path and gave me the opportunity for the recovery and restoration of antarctic heritage items.