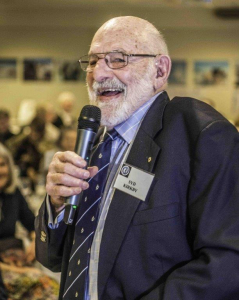 In recognition of his outstanding Contribution to Antarctic affairs and the Antarctic Community, particularly for his Leadership and Achievement in the field of Exploration Surveying and Mapping of Australian Antarctic Territory.

Presented at the AGM
Brisbane 15 August 2020

President and councillors of the ANARE Club, expeditioner comrades and ANARE Club colleagues,

A long-term disappointment to me is that it is still wise to clarify how one uses that beautiful word “comrade”, so I hasten to say that my literal technologist’s mind uses it now, as it always was properly meant, namely as meaning those with whom one has shared serious endeavour and trust and common purpose and admiration and deep, deep affection.

This honour that you have bestowed upon me today is particularly gratifying. Not only does it commemorate a great man whom I admired deeply and also had the privilege of enjoying hugely as a dear and utterly stalwart friend, but it is an honour awarded by my comrades, not by some great shapeless system.  It is especially precious for the very fact that it was awarded by those with whom I shared any endeavours which might have earned me the honour you bestow on me.

Fundamental to the receiving of this high honour is the central fact that, like all of us, I never was on an expedition on my own, I always had my comrades, and that inescapably means that all of our hands are together upon the award.  And I’m sustained and proud to have those comrades standing, figuratively with me as I receive the honour.

Right now, I feel very powerfully the presence with me of particular comrades and fellow Antarcticians, Phil himself, “lefty’ Dick Thomson, the great and vastly under-recognised Bob Dovers (difficult bugger, great Antarctician), Peter Crohn and Lem Macey, Gringo Collins and Lin Gardner, Ric Ruker and Noo foreman Bennett, Dougie Leckie and the old GD, scores and scores of them.   Not bad comrades, eh? And we have all had their like.  I invite you to join me in a moment’s reverie upon our old comrades and the deeds we did together, and the boundless privilege of having been among his “we few, we happy few, we band of brothers”.

So, my friends, my colleagues, my comrades, from the depths of my being I thank you for this honour, and much more for the bits that led to it.

Now this is the point at which a prudent awardee would shut up and sit down, and spend the rest of the evening sneaking surreptitious looks at this very handsome medal, but there’s a bit of a bee in my bonnet and of which, for the honour and regard I bear our common heritage, ANARE, I wish to speak.

ANARE, the Australian National Antarctic Research Expeditions.   What a grand and proud name!   It’s clearly not just we who think so because right up to now, what? 30 years on from when concerted efforts first began to be made to replace the name it still insistently survives among not only relics of a less constrained time, like we who were officially and unequivocally “expeditioners” but equally proudly and doggedly among members of the modern-day expeditions, despite some pretty determined discouragement.

Personally, I should be deeply disappointed to see the name ANARE, and the ethos that attended its existence wither and die.  Clearly modern-day expeditioners, too, would feel a significant loss if they succumbed to being mere parts of a “program”. Phil himself would be desolated, heartbroken.

With the birth of a new, and I trust bold new era of venture in a grand new ship, and with the promise of a re-development of deep field traverse capability, mind you, I don’t know that I accept that we ever lost that capability and, if you doubt it, just take a quick look at Rob Kiernan and his merry men plucking the Amery/Lambert basin traverse out of thin air, a few years ago. Epic journey, epic science.  If we add in the more than the half century belated stirrings of will to realise upon the huge scientific, operational, economic and influence benefits of an all-weather, all year aerodrome (not landing ground but airport) at Davis, with Australia as its portal, what better time could there be for Australia to rediscover its Douglas Mawson and Phillip Law driven proud expeditionary spirit, and nail that flag to the mast and proudly declare that the cutting edge of our national Antarctic endeavours is, once again, ANARE. The Australian National Antarctic Research Expeditions.

That fine old ANARE stalwart, Bill Burch, has recently taken up this cause and sought commitment through the club to a campaign to this end.  Can i add my voice to his and offer my limited remaining capability to an ANARE Club driven endeavour to promote the idea and expression of ANARE as the operational core and proud family tree of the Australian Antarctic Program.   Our record when we were ANARE, rather than ex-ANARE, suggests we can give it a serious shake, and it would a fitting memorial to Phil to return his proud offspring to centrality in Australia’s Antarctic endeavours.