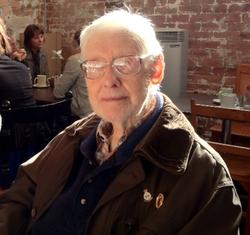 Peter had become increasingly frail over the last few years. However he remained cognitively sharp and always liked to talk about his great love for his time with ANARE. He certainly had enough to talk about: Peter wintered at Macquarie Island in 1948, with the British Antarctic survey at Hope Bay in 1953 and John Biscoe in 1955, Mawson back to back in 1957 and 1958, Casey 1977, and finally Macquarie Island 1979.

Peter told me once…’I never dreamed I’d ever get down there… The ship I was on was sold in Shanghai. I had it in my contract to come to Australia…That was in 47. ANARE had just started and I said to me mates ‘..oohh I’d love to go’…and a mate replied ‘write to Douglas Mawson’..

Peter will be greatly missed by his Tasmanian and other ANARE friends. His stories will be remembered, not only now, but also in the future as he made over 5 hours of recordings as part of the ANARE oral history project. A copy of these recordings is also held by the BAS archives.

A funeral service will be held at the Karingal where Peter had lived for the last 10 years, in the Chapel, Lovett Street, Devonport on Tuesday September 10, 2013 at 2 pm
From Anare Tas Newsletter