A VOYAGE TO ANTARCTICA AS ANARE CLUB REPRESENTATIVE 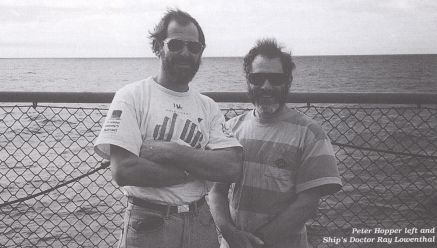 How does an ex-expeditioner maintain his link with Antarctica? He joins the ANARE Club. If he is sensible he becomes a member of the Club Executive or State Branch Council. This in turn could provide, as it did for me, the opportunity to return to Antarctica to view at first hand the changes I had heard so much about – to associate with the modern expeditioner and, if possible, detect evolutionary changes. Living in Queensland, so remote from the main nest in Kingston, Tasmania, seems to preclude association with recent expeditioners. I couldn’t wait for the contact.
A brief stopover in Melbourne put me back in touch with 1977 Casey fellow winterers, Jeff Wilson, Egon Wherle and Barry Southern. Now there are three good reasons for becoming a member of the Club. Jeff Wilson and wife Kaye provided exceptional hospitality while in Melbourne. Dinner with Club luminaries Brian Harvey, Max Corry, and Michael Mallis at Monroes Restaurant, St Kilda, on a wet April 7th night provided me with a sackful of Club saleable items and a directive to market the Club in the great white southland. An evening typical of past Melbourne experiences – does the College Lawn still exist? Unfortunately, I missed the Club barbeque at Ian Mackie’s on 9th April, so was unable to confirm this.
Kingston, Hobart – headquarters of ANARE, an extraordinary cocoon-like office network which anticipates what the pending expeditioners could expect at one of the new station complexes. Fellow 1977 expeditioners Bob Sheers, Ian Kavanagh and ‘76 Mawsonite Murray Price, still working at the Division, assisted me greatly in my reintroduction to ANARE. Dinner with Bob Sheers and Adrian Porter “fresh back from an exciting year at Casey” was a highlight of my pre-embarkation time in Hobart.
With a hoot at the Hobart Bridge to stop the cars, Aurora Australis voyage 7 departed Self Point refuelling depot at 9:15 on Good Friday 1995. A full moon, calm slightly misty conditions provided an omen of a pleasant trip south. Birthday celebrations for new Casey expeditioner Neil Drummond, with cake provided by Shaun Johnson, ex. Casey TV identity, darts person and 1995 Macquarie winterer, set the mood for a first class-trip.

CASEY STATION
This latest voyage ever to service a continental Antarctic station had specifc aims:
Delivery of four wintering personnel, mail and eight tonnes of cargo, RTA of 30 expeditioners and limited cargo. Aurora Australis would situate north of the Petersen Bank and all transfers to Casey would be by the S76 helicopters. These two helicopters had recently completed flights from Mawson and were sited at Casey after eight months in Antarctica. See Aurora March 1995. It should be noted that this unloading operation was made logistically very difficult by unfavourable weather conditions prior to commencement of operations, a helicopter mechanical problem, and the distance the ship was instructed to lie off Casey.
Fortunately, excellent weather prevailed on Monday 24th April, minus 20°, clear cloudless sky, a sunrise presenting exceptional sun pillars amid the unparalleled iceberg panorama of the Petersen Bank. Great ice conditions, some open water and superb decisions from Captain Peter Liley, ice pilot Arne Sorensen and voyage leader Ross Jarnieson – the ship was manoeuvred to its best location in order to complete a successful operation. After one and a half days almost within sight of Casey, Aurora Australis drew on its 16,000 kW of power, turned in a 300m radius in medium ice without apparent effort and headed north to Macquarie Island. I was sad and disappointed that the scheduled visit to the station I had waited l7 years to revisit was now beyond possibility. I could not now satisfy any personal opinions on the ‘new’ Casey environment – maybe next time.
Anzac Day saw great excitement with traditional two-up and finger foods on the trawl deck, a unique gambling venue. The evening contributed $150.00 to the Camp Quality charity.
Ongoing ship-based scientific operations on voyage 7 proved very successful. Met. Bureau drifting Argos weather buoys were deployed at three locations enroute. Information received from Met. indicated successful operation of all deployed buoys.
Three ICEX glaciology drifting data buoys were deployed in sea ice at 100°, 120°, and 130° E, 65°S, before heading NE to Macquarie Island.
Affable, enthusiastic marine biologist Robert King brought a new dimension to the art of krill catching. Specialised nets trawled in isolated polynyas brought up some 1000 plus Euphausia superba to the manually controlled holding tanks of Aurora Australis’ marine laboratory. Maintenance of the catch with minimal attrition through continual water changes and temperature control until Hobart proved a demanding task. Australia’s foremost ocean-going marine biology laboratory requires some sophistication. Thermostatically controlled ‘clean at faucet’ sea water would dramatically simplify such laboratory operations.

MACQUARIE ISLAND
As part of a RAN hydrographic program, a bathymetric survey from a way point off the Bishop and Clerk Islands following the west coast of Macquarie Island to the anchorage> point in Buckles Bay was undertaken. On completion of operations, the survey was continued from Buckles Bay and data recorded to the north east of the Judge & Clerk Islands. Relatively good weather conditions prevailed enabling the preferred surveys to be completed.
The good fortune of small seas prevailed, but the ‘Farm’ still provided examples of its intemperate weather patterns.
My position as “Club Hawker” was soon to be justified. At voyage leader Ross Jamieson’s instruction to board the first chopper fight, I was back on Macquarie Island after 17 years. I was delighted to see ‘like an old friend’, she hadn’t changed and it seems to me nor had the expeditioners, only the faces and names, except for Graham Mills, who would always be that ANARE spirit I remember.
An extraordinary effort had been put in by the expeditioners in preparing RTA of rubbish and equipment from Macquarie. There was an air of enthusiasm abounding which was quite obvious – field huts had been upgraded and cleaned out. Resupply of field huts was undertaken by the choppers during this short RTA. Retrieval of 17 expeditioners and 30 tonnes of cargo and resupply to the station was professional and smooth.

Without the S76 helicopter’s high performance level in sometimes quite difficult conditions, this service operation to Casey and Macquarie Island could not have been achieved within the time frame. The sole transfer of equipment and personnel to and from the stations by S76 helicopters alone will prove to be a bench-mark for all future operations.
With vast changes in communications, technology, transport systems, station comfort and bureaucratic regulations, life for the expeditioners has changed to the point where the term ‘expeditioner‘ would seem not to be appropriate anymore. A terminology such as ‘remote area worker’ might better suit. While some bonding by the experience was apparent among returning expeditioners, only time will show whether changes in the ANARE operation maintains the bonds of the ANARE I first knew.
I am deeply grateful to the ANARE Club and to the Antarctic Division for the opportunity to revisit that place which impacted on my life so greatly. Thanks to all those old friends and new acquaintenances who made this trip so memorable.
Remember ANARE and all those who sail in her…give yourself the opportunity to maintain the link and continue to bond, framed by the unique privilege of knowing Antarctica. Join now – ANARE Club.