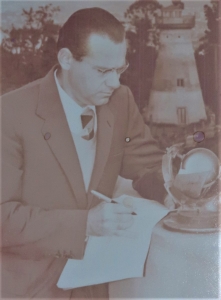 Paul was conscripted during the Second World War and chose to join the Air Force with dreams of becoming a pilot. Poor eye sight and the ability to recognize cloud formations meant that he became a weather observer and served in New Guinea.

After the war he joined the Bureau of Metereology as a weather observer and technical officer.

He accepted posting to many parts of Australia including Willis, Macquarie (1957), Norfolk and Lord Howe Islands before finally settling in Melbourne.

He left a quirky account of a year spent serving on Willis Island which can be found at:

He retained his interest in all things metereological, musical and nature related until his death at the age of 96.

He is survived by his wife Elvira, and daughter Andrea.