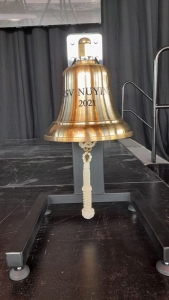 The Official Launch of the RSV Nuyina

the ANARE Club’s Presentation of the Ship’s Bell

The Official Launch of the RSV Nuyina hosted by Honourable Sussan Ley MP, Minister for the Environment, was held in the Port of Hobart’s Macquarie Wharf 02 Building, adjacent to the moored RSV Nuyina, on Saturday 18 December 2021 commencing at 9.30 am, before a crowd of approximately 150 invited guests.

Also attending were the Ambassadors of Antarctic nations, including the Ambassadors of Romania and the Netherlands, the two countries associated with the Nuyina’s construction. Representatives from Serco, AAD staff and students from St Virgil’s College Hobart who were one of the Schools which suggested the name of the Ship accepted by the Judging Panel. The other school, Secret Harbour Primary School near Perth, Western Australia, was unable to attend due to Covid travel restrictions.

Following a Welcome to Country delivered by Dewayne Everettsmith from the Tasmania Aboriginal Centre, speeches were delivered by the Distinguished Guests listed above, each referring to the recent tragic events at a Devonport Primary School.

The highlight of the occasion was undoubtedly the presentation of the ship’s Bell by the Club President George Friend, which was draped with the Club’s 70th Anniversary flag and unveiled by the Prime Minister, the Hon Scott Morrison MP. The Prime Minister was invited to ring the Bell, which was immediately answered to the delight of the guests, by a blast from the Ship’s horn alongside. 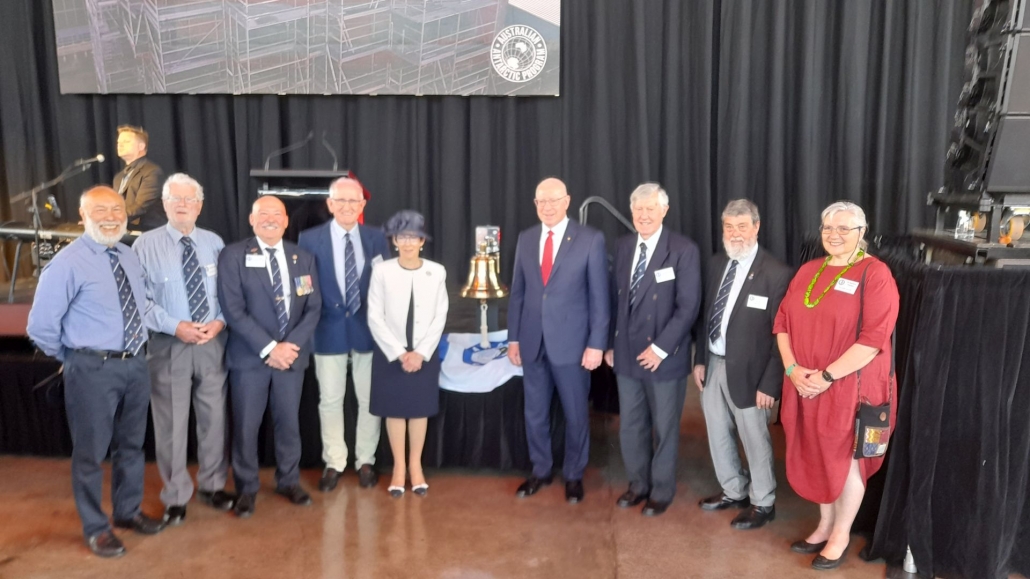 During the Reception which followed, guests expressed keen interest in the Bell, which became the centre piece of the exhibits and President George was able to host the Governor General and other dignitaries in showing the Bell and the other presentations being made by the Club to the Captains of the Ship (who regrettable were unable to attend due to COVID restrictions).

The occasion and the presentation was historic honour and recognition of the work of the Club on behalf of its Members and special thanks are due to the Council’s Project Group led by Vice President, David Dodd, the Queensland Branch Secretary, Trevor Luff for his engineering prowess in designing the stainless steel fixing bracket for the Bell; our Tasmanian Members, especially Dr Barbara Frankel for her presentation of the Bell Lanyard, Jan Adolph and Dr Des Lugg and the support from the Qld Branch Committee. National Council members, Mr Trevor Cowell (TAS) and Mr Ron Hann (SA) also attended.

A tribute to the makers of the Bell, Peter and Robert Olds of Maryborough, Queensland and to the engraver, Brendan Currie, of National Engraving, Bendigo, Victoria, are engraved on a Brass plaque recording the event, to be placed under the Bell following its installation on the Bridge of the Nuyina.

We understand that the RSV Nuyina will be on display during the 2022 Antarctic Festival in Hobart during August 2022. The Club will have a booth at the Festival and we hope that Club Members will take the opportunity to attend. The year 2022, will also be the 75th Anniversary of ANARE, now known as the Australian Antarctic Division responsible for today’s Australian Antarctic Program. The Club will be involved in this milestone event and again proposes to present to the Nation, another historic Bell from the LST 3501(aka HMAS Labuan), the ship which established Heard Island in December 1947 and Macquarie Island in 1948.

John Russell hands over his Antarctic Collection
Scroll to top