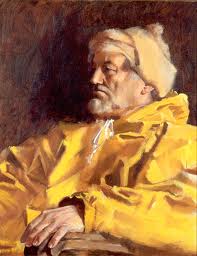 Below is an anecdote that relates to Phil Law’s significant contribution to arts education. It is the postscript of my PhD thesis, ‘Antarctic Animation: expanding perceptions with gesture and line’ (submitted to the College of Fine Arts, University of New South Wales, April 2010), which features the artistic responses to Antarctica of ANARE veterans Fred Elliott and Jack Ward….

“On the day of the first lunar landing, 20 July 1969, I entered the National Gallery School of Art in Melbourne. This was the school that my great-grandfather, the painter Tom Roberts, had attended. The old school felt like home ground. I attended life drawing classes and used the same easels he would have known. Then suddenly everything changed. The school was moved and renamed. ”

Under the leadership of the sculptor Lenton Parr, the school was transformed to become the heart of the emergent Victorian College of the Arts (VCA). After years of directing the Australian Antarctic Division, Phillip Law guided this project as Chairman of the Victorian Institute of Colleges (VIC) (Sturgeon et al., 1984, p.25). Law and Parr shared a vision. Training in the various disciplines of art would be integrated to form a new college so that art could become more a part of the community than was possible through ‘single discipline’ institutions. At the VCA I worked with other students to make experimental films that combined drawing, dance, and animation. Lectures were given that related the arts to other fields of knowledge. As a sculptor who worked with metal, Parr shared with us his deep understanding of earthly forces that provided the physical and aesthetic sources for his work. We were introduced to geology through art. The artist Bea Maddock soon joined the VCA as a teacher. Years after I left the college she travelled as an artist to Antarctica. She said that going there was like going to the moon.

After my own Antarctic voyage and the research project that resulted in this thesis I relate to my home ground differently. I more deeply perceive and understand Earth as a delicately balanced system that we are just on the edge of knowing. I understand the meaning that our senses can bring to scientific information.

The words of a cosmonaut (Taylor Wang, China/USA, in Kelly, 1988, p.60) [footnote: Taylor G. Wang was a cosmonaut who worked on the American space expedition, Challenger 7, in April 1985. ] accord with my belief that our senses are essential for understanding climate change data in ways that can stir us to maintain the health of our home planet:

They say if you have experiments to run, stay away from the window. For me, preoccupied with the Drop Dynamics Module, it wasn’t until the last day of our flight that I even had a chance to look out. But when I did, I was overwhelmed.

A Chinese tale tells of some men sent to harm a young girl who, upon seeing her beauty, became her protectors rather than her violators. That’s how I felt seeing the Earth for the first time. ‘I could not help but cherish her.’