Derived from The Buloke Times’ article on 11 June 2021:
https://www.buloketimes.com/news/how-cool-is-captain-hornsby-leighs-life-in-the-antarctic 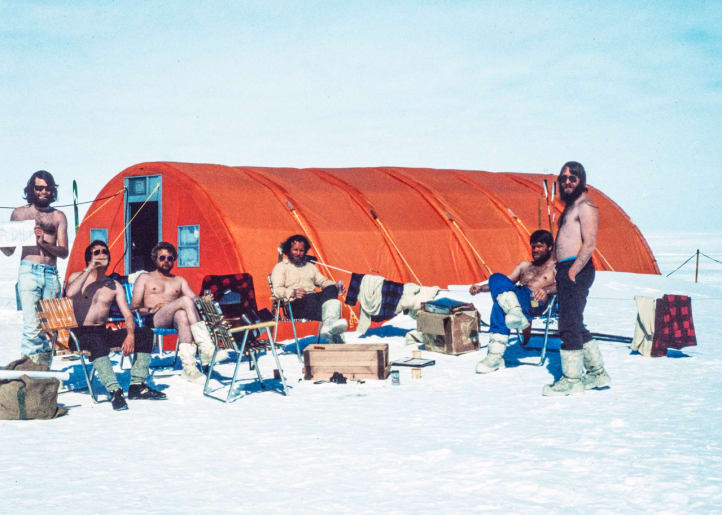 (By Quill with the help of ANARE club members)

As kids we often say we want a cool job when we grow up, but has anyone ever topped “Antarctic adventurer” cool?

If you are like me, you haven’t given much thought to the area of land south of us at the bottom of the globe, despite the fact that it is twice the size of Australia and doubles again in winter when the sea ice forms up to 120km out to sea during the winter months with temperatures down to minus 94.7 degrees celsius (which was recorded in August 2010). So, if you just thought it was a big chunk of ice down there, you’d only be partly right.

Antarctica is roughly 3,000 metres above sea level, with just 2% of land protruding above the ice mass. The total thickness of the continent is roughly 5,000 metres, with 2,000 metres sitting below sea level with the land being weighed down by the ice mass. Forty two percent of Antarctica is claimed as Australian Territory. There are stations other than Australian set up throughout the Australian Antarctic Territory also for the purposes of scientific research.

Ice-drilling is a perfect example of such research – the covering layer of ice in Antarctica grows each year an average of about 200mm. To drill down into the ice essentially accesses a detailed timeline of information frozen in the layers of ice. To access a solid mass of ice a million years old is to access a frozen history of the globe.

To put it in perspective, the smoke particles from the first Broken Hill furnace, NSW, to be fired in 1889, arrived at the South Geographical Pole some days later, and 22 years before Amundsen who arrived at the South Geographical Pole on December 14, 1911 with Scott arriving there 35 days later (January 17, 1912). So far, that frozen timeline has been drilled back as far as 800,000 years, and now the scientists are searching for the one-million-year-old ice core sample.

Captain Leigh Hornsby
The reason I have learned these things about Antarctic exploration is because my attention was recently turned to former Donald resident, Leigh Hornsby, and his numerous life achievements as a helicopter pilot and engineer. Though aviation engineering and piloting are far beyond my grasp of understanding; I have to admit, my subject of interest is pretty cool – so cool he has an island in Antarctica named after him.

Leigh Hornsby started with the humble beginnings of an automotive apprenticeship at Shilton’s in Donald. From there, he got his pilot’s licence, then helicopter and is also an engineer. The list of helicopters he has piloted is a long one. Even without knowledge of the machines, his resumé looks impressive in­cluding Hughes 500C and 500D, Bell 206B, Bolkow BO105, Aerospatiale SA315 Lama, Aerospatiale AS350B Squirrel and long range Sikorsky S76A Mark II helicopters.

Retired now, Captain Leigh Hornsby made his first flight to Antarctica in 1977, devoting countless hours since to Australian National Antarctic Research Expeditions (ANARE now AAP based from Hobart) in his capacity as Senior Helicopter Pilot with Helicopter Resources Pty Ltd, including 30 trips to the Antarctic in all.

Last year, Leigh gave a speech to the ANARE club (watch it for yourself following this link: https://vimeo.com/ 423559146), detailing stories from his long career with Helicopter Resources piloting the most southern regions of the globe, not only for Australian scientists and researchers, but also for German, Italian, Chinese and Pakistan as well.

It was while working with the Germans that Leigh discovered a relic aircraft from an expedition prior to World War II; Admiral Byrd’s Fokker monoplane that wrecked in the 1930s near Little America, Marie Byrd Land. 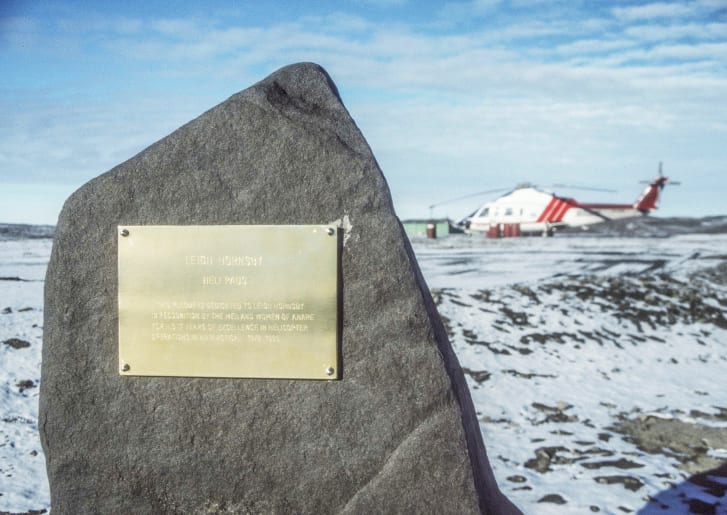 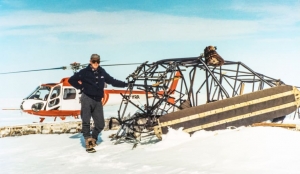 Top: Leigh Hornsby with his discovery, the relic aircraft from an expedition prior to WWII, Admiral Byrd’s Fokker monoplane that wrecked in the 1930s – Photo Leigh Hornsby 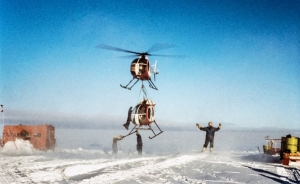 Safety in Numbers
Captain Leigh Hornsby was making flights to Antarctica well before current GPS technology was available in aircraft, making his job incredibly dangerous at times. Some of those dangers included something he explained as “white-outs”, and what could only be imagined as the reverse of pitch black; white blindness perhaps. How can one be expected to fly or land a chopper in conditions like that? Leigh’s answer is simple, you don’t. A white-out is perhaps the biggest killer in the Antarctic.

To provide support in extreme conditions, expeditions would venture out in threes; with two choppers available to take passengers should anything happen to the third. Later, with the advancement of guidance technology, pilots could venture out independently, providing they remained within 30 minutes’ distance of another aircraft.

Mawson Station is the first Australian mainland camp to be set up in the Antarctic. This happened in 1954, with one of the original members of this camp celebrating his 101st year of life in Queensland on June 18 this year. The stories members share about living in these extreme conditions seem fantastic compared to “normal life”.

The collective knowledge of the ANARE club members to whom Leigh directed his speech could provide the movie industry with action/adventure film ideas for life.

Recollections include dog sled exploration with huskies, helicopter piloting, rescue and recovery, relic discovery and all things extreme, given the conditions they were conducted in – visit the club’s site at www.anareclub.org to learn more about their Antarctic adventures.

Leigh Hornsby’s medal citation states that “his competence, skill and attitude have been central to the development of ANARE’s helicopter capability and has enabled it to move safely and confidently towards long range and inter-station flights. The long range aviation capability has enhanced Australian Antarctic scientific and operational capacity.

“He has been responsible for the development and direction of the company’s training and operational procedures, including safety training for both aircrew and expeditioners. The strong emphasis given to the education of expeditioners in training courses and publications, and in operational standards set in the company’s Operations Manual have contributed to ANARE’s enviable helicopter safety record, and are testimony to Captain Hornsby’s guidance and influence.

“Captain Hornsby’s good nature has made him a valuable member of those expeditions in which he has participated. His maturity has been a stabilising influence in field operations in the Prince Charles Mountains, where extended isolation and solitude can influence small groups. His leadership qualities have helped to create the necessary expeditioner regard for the hazards of Antarctic aviation. He is an excellent example to his fellow expeditioners, and has earned the respect of those that have been fortunate to travel and work with him.

“Captain Hornsby’s personal commitment can best be measured by his long participation in ANARE and willingness to undertake difficult tasks.

“While the popular conception of Antarctic aviation is one of adventure, excitement and discovery, its major component is the completion of laborious and often repetitive tasks. Tasks (such as sling loading large quantities of cargo between ship and shore) are often undertaken alone in marginal weather conditions and over long hours. Captain Hornsby has always been happy to accept onerous tasks, ensuring that they are conducted safely and efficiently.

“His willingness to undertake an extended and difficult 1994–’95 summer to ensure the satisfactory trial of Sikorsky S76A Mark II helicopters demonstrates his devotion to Antarctic aviation and ANARE. The need for a medical repatriation during the 1994–’95 summer resulted in him flying one of two helicopters from the RSV Aurora Australis to Davis, via Casey and Mirny in one day. The flight of about 2,500 km approximated the distance from Hobart to Alice Springs.”

Leigh alternated summers in Antarctica with winters spent exploring for minerals in outback Australia, Indonesia and Papua New Guinea. His final trip south was in 2016, and a year later he retired from Helicopter Resources after an accomplished career of more than forty years. 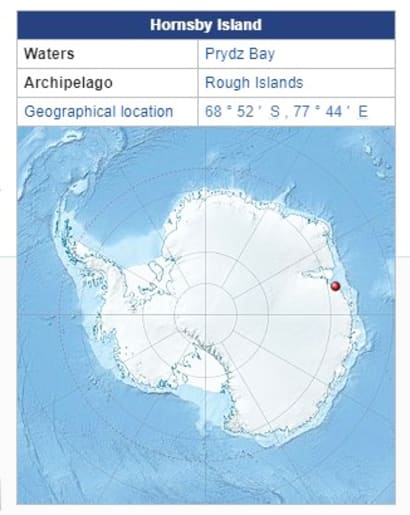 Derived from The Buloke Times’ article on 11 June 2021:
https://www.buloketimes.com/news/how-cool-is-captain-hornsby-leighs-life-in-the-antarctic

Call for Nominations to the ANARE National Council