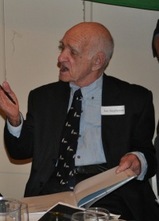 Associate Professor Jon Stephenson passed away this morning after suffering a large stroke.  Jon was highly respected Geologist and led several expeditions to Antarctica.  He was well known to many ANARE Club members and attended the Tasmanian midwinter dinner in 2010 with his daughter Sara.

Jon graduated from the University of Queensland with first class honours in geology. In 1957 he was appointed the Australian member of the Commonwealth Trans-Antarctic Expedition (TAE), the first expedition to cross the Antarctic continent. Later that year Jon surveyed the previously unexplored Shackleton Range by dog sledge.

Jon gained his PhD in London, and worked for a time with UNESCO in West Pakistan, where he conducted geological research in the Himalayan region. He led climbing expeditions in the Himalaya, one of which saw him come within 500 m of the then unclaimed summit of K12 (7500 m).

In 1961 Jon established the geology department at James Cook University, where he worked until his retirement in 1995.