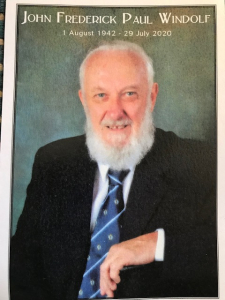 I trust I can give you comfort and assurance that John ‘Windy’ Windolf was held in the highest regard by all members of the ANARE fraternity. John was not just the cook down south but a true world explorer, a gentleman and a most knowledgeable one at that.

Just five years ago almost to the day I stood at this very spot and delivered a Eulogy for another one of our ANARE members, Kevin ‘Mumbles’ Walker. I mention this because we spent the summer of 69/70 at Mawson which is in the same era as John, who arrived at Mawson some 12 months later. I also mention this because of the names which various expeditioners are known by. ‘Mumbles’ was an Antarctic legend and known world-wide by that name with mail arriving in Noosa for decades addressed to Mumbles, Noosa. The mail was always delivered.

The name ‘Windy’ also had the same notoriety around his ANARE mates and no doubt around Coolum as well.

I put out a call to his remaining fellow Winterers to send in a one liner or two for this Eulogy and did manage to gather a couple.

First of all, sincerest condolences to Francis from Col Christiansen for your sad loss and a thank you to Col from myself TL, for arranging the email trail to allow me to gather the following missives.

During the changeover period, life on the base can become most hectic and stressful with the incoming crew trying to establish their patch and the outgoing trying to finish off projects and pack up. I have received a note from one of our 1970 wintering crew Bob Tompkins who told me the storey of coming in off shift and walking into the dining room and kitchen wearing his cold wets which were our, around the base boots, cold and always wet. ‘Windy’ had just finished polishing the floors to the regulation spit and polish Navy standard and did not take to kindly to Bob leaving a trail of debris from his boots on his spic and span floors. After an exchange of some very testy words Bob did back down and agreed with John, it was not very polite to act in such a manner and did apologise for his actions. Peace was restored.

A phone call to Paul and he sends his sincere condolences. Paul our Chef for 1970 handed over to ‘Windy’ in 71 on our departure. Paul and Jane live just 10 minutes down the road from the Coolum home of John and Frances.

A phone discussion this morning 5th with Garth Palmer ‘met tech’ 71, also living just 10 minutes down the road from Coolum at Minyama and just over the road in Parrearra from our 1970’s cook, Paul Siddall.

Garth informs me, if you ever complained about the food ‘Windy’ would reply ‘you are still alive aren’t you’ and someone else would shout out, who called the cook a B with the standard reply being, who called the B a cook and so the banter would go.

Very sorry to hear about John.

I have many memories of him at Mawson, including that he was on the spring traverse to Mount Cresswell of which I think, Kit and I are the only ones of the eight still left (could be wrong there).  He went along for his navigation skills a subject about which he was very keen and could be seen out regularly as we ‘choofed’ along taking sun shots etc – no luxury of the GPS in them wild old days!

(TL. Myself and five others pioneered the track into Mt Cresswell, Spring 1970 and left marker canes with flags along the way. We also left the map with the Alan Foster, theodolite generated star shots at key points along the way. It would be interesting to compare readings and track taken by both expeditions. We also delivered the heaviest pay load ever hauled over the longest distance into the Antarctic at that time. I am also the last man standing).

Martin continues; Also, wasn’t he one of the ones that cranked up an ice yacht that had been bequeathed us by the 1970 party?  I think he did a fair bit of sailing on Horseshoe Harbour on that.

John could turn on some very good tucker for us.  I think the thing I remember though (and my family has had to put up with this over the last 50 years when I serve them up food), was how he used to lean over the servery, plate full of food in hand, and a smile on his face, and say as he handed the plate to you: “get that in your scurvy gut”.  I can still see him now doing that.  No doubt came from his Navy days. Thank you for letting us know Col.  I look forward to the reunion whenever it proves to be possible.  I had a really great time at Mawson in 71 – I thought so at the time but it seems to get better every year. Take care everyone. Martin Betts

Greetings Everyone. Thanks Col, for sending on the sad news of John’s passing. Thanks also to Marty for your comments, good to hear from you. I well remember John making that famous comment as he handed over the dinner. I have a B&W photo of him doing just that. I also remember his navigation skills as he tried hard to teach a few of us the rudiments of celestial navigation.

Sorry to hear about Windy – will contact Frances and send a card this week. Yes, there were many memorable moments during the year – I also remember ‘Windy’ saying with a laughing lilt “get that into you .. !”.    And not forgetting the memorable container of hoosh that “found another home” late one night while Lem and a few Intrepids were cooking up a midnight snack in the kitchen after a few homers in the Rec Room.

We may be the only 2 remaining from the Spring trip to Cresswell … and with the passing of Steve H in ’17, also the team the traverse left until the Summer party arrived.  Also the chopper pilot, Vic Barkell who was first of the advance party that flew to Cresswell in the Porter, arriving late at night or was it early morning?

Subject to the whims of COVID-19, hope to see you all in Brisbane next year 2021. Cheers, Kitksi

Damien Macey August 2nd. (Son of the 71 Station Leader, Lem Macey)Sorry to hear of John’s passing. If anyone is in touch with John’s family, could they please pass on my most sincere condolences. Here’s a few pics from LEM’s Mawson ’71 album.

Regards and best wishes to you all, Damian Macey.

Hi All. Once again, we lose another member of our 71 crew. I will never forget our chef, cook and friend in fact until very recently I have been using the hand written recipe and oven instructions that he gave me when I took on the bread baking duties whilst the spring traverse was away. Let us hope that our lives will be back to a more normal style and our reunion can take place.

I have received word from Colin Christiansen of John’s passing and I understand that you are looking for some anecdotes to include in your eulogy. John would be pleased to hear that his most memorable utterance – “Get it in yer scurvy guts!” has stood the test of time on the other side of the planet.

I have occasionally used it when taking my turn to serve tea and biscuits at local village hall meetings and in other settings. Many looks of disapproval have been experienced but so have enquiries from more inquisitive folk. I can assure Frances that Mac Robertson Land’s premier chef will continue to be remembered from time to time hereabouts.

Perhaps less well known to Macey’s Mob’ in 1971, was John’s interest in sunspots, which he and I observed using some makeshift equipment at Mawson. John would also be pleased to know that I’m hoping to use sunspot data from the European Space Agency’s Solar Orbiter spacecraft, launched in February, to continue our 1971 observations from the comfort of a computer terminal.