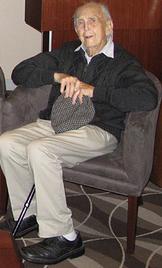 How to describe Jack…he was quite simply a delight, an absolute gentleman, an astute observer of himself and others. He had a great love of organ music, and appreciation of art and conversation.

Jack had a ‘fairly longstanding fascination with the stories of the Antarctic and the explorers and the strangeness of it’…but never imagined he would go South.   However in 1949, after seeing several advertisements for the Heard and Macquarie expeditions he ‘..rang the Antarctic Division and an appointment was made to interview you.  In my case, it was in the back of a taxi with Phil Law, who asked a few questions and then said, I think you can assure yourself that you will be going…’

After Macquarie Island Jack worked for several years  as a ships  radio operator out of England then ‘…Phil Law wrote me a letter saying he was compiling the membership of the second expedition and he invited me to join. I was tossing up and decided I was enjoying things in England so much I would like another year there and also I was a bit scared whether I was up to the rigors of a mainland expedition so I asked him could he put it off for another year which he kindly agreed to do and I was put on the second year at Mawson…’

On his return from Mawson Jack became the librarian at RMIT for 25 years, before retiring at the age of 60. His reasoning was ‘… I come from an extremely short lived family, my father was dead at 56, my brother at 52 my sisters at 54 I think my oldest sister made 60 so I decided that if I retired at 60 I would be lucky to get 5 years retirement…’

There will not be a funeral service as per Jacks wishes.
From Anare Tas Newsletter 19 Sept 2013