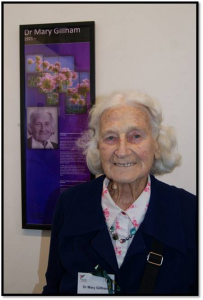 Dr Mary Gillham passed away 23rd March 2013, aged 91. Mary Gillham was part of the first female ANARE expedition to Macquarie Island in December 1959. Her fellow female scientists were Isobel Bennett, Hope MacPherson and Susan Ingham. She travelled with ANARE for 14 days, her scientific purpose on the island was to analyse the effects of sea birds on the island’s vegetation. Mary spent five days on Macquarie but still explored as much of the island as she could. She kept a diary of her time there and made notes on the exceptional wildlife inhabiting the island. The complete timeline of Mary’s Macquarie trip and more of Mary’s accomplishments during her life can be found at http://www.marygillhamarchiveproject.com/