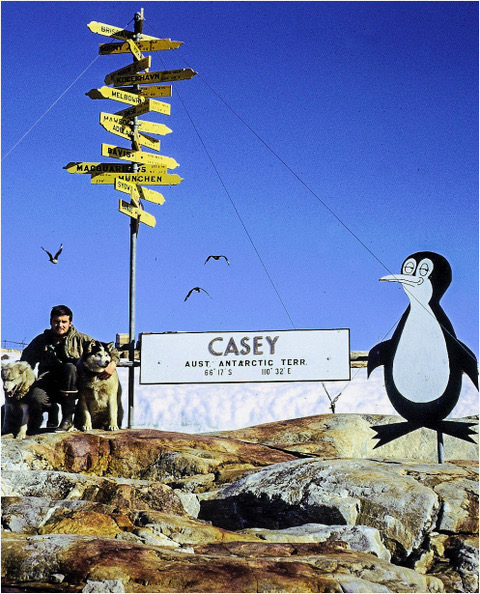 VIMEO LINK: Dave Bishop next to the Casey sign he erected as his mid-winter project in 1970 © D. Bishop

This is another film just posted on the ANARE Club’s Video Channel – this time from Dave Bishop about his year at Casey in 1970 (link https://vimeo.com/467946770 ). There are now about 90 films up on the channel for all to enjoy, Club members and the public alike. They can be accessed through the ANARE Club’s fabulous new website at anareclub.org.au under the Memories heading.

While being young, adventurous and a bullet-proof guy serving in the RAAF in the sixties, I had been applying for postings to places like Vietnam, Ubon Malaya etc. without success. I even applied for a transfer for Army Aviation training, but my application was sent back to me by my Commanding Officer marked ”critical mustering, request denied”

A couple of the RAAF guys I worked with had been down with the RAAF Antarctic Flight (Alfresco flight). I had seen their slides and heard their stories. It was about this time that an advert appeared in the Sydney Daily Telegraph (Saturday March 22 1969) saying things like “The chance of an adventure of a lifetime with the Australian National Antarctic Research Expeditions” along with a guy holding a Husky. So off went my application.

Our year at Casey 1970 was a good one, except for the cook resigning and not cooking anymore!. We were all “Polar Virgins”, no one had been south before, so we learnt by our mistakes. It must have been a good year as over 25% of us went back and did another winter.

This video was made in 2010 to celebrate our 40th anniversary. We had a reunion at Adelaide mid-winter and I sent a copy of this video to all that I could tracked down, including three from overseas. For the 50th anniversary celebration in 2020, we had a Zoom hook up at mid-winter. The link to Dave’s video is https://vimeo.com/467946770