The ANARE Club was pleased to join with His Excellency, Ambassador Dr Alexey Pavlovsky and his Staff from the Embassy of Russian Federation to Australia, to co-host the Bellingshausen 200th Anniversary Reception at Canberra on Monday evening 30 November 2020. The event commemorated the day 200 years earlier, when Captain Bellingshausen first stepped ashore on Australia’s Sub Antarctic Macquarie Island, during Expedition’s circumnavigation of Antarctica 47 years after Captain Cook, during 1819-1821. The Expedition was the first scientific expedition to visit the Island and its discoveries were of great scientific and historical value and form an important part of the Antarctic history of our two nations.

The Bellingshausen visit opened the door for future scientific research in this remote sub Antarctic wilderness. ANARE set up the first manned scientific station there in 1948 and today still sends expeditioners to overwinter in this jewel in the Southern Ocean. The Island remains today as a key southern hemisphere meteorological station and its weather observations trace back to Mawson’s  AAE1911-1914.

Interestingly, the Island would have to wait another 136 years for the visit of the First Soviet Antarctic Expedition, which arrived there in April 1956 in the Icebreaker Oob, returning from building Russia’s Antarctic IGY1957-58 stations. A party of 13 scientists descended on the station and overnighted before returning to the ship next day , hosting an onboard dinner for the Station Leader Ian Adams, including Doug Twigg, now the only member left of the 1956 Party-(Doug will celebrate his 93rd birthday in the New Year.  Given the exchange of warm hospitality, the Island took a few days to recover.

Since the removal of rats, cats & mice, the island is rapidly rejuvenating and will soon look similar to how Bellingshausen found it 200 years ago. During the reception in Canberra, there was great interest in the successful video link with the Australian station on Macquarie and the Russian station , ‘Progress’, which is situated on the Antarctic continent behind Davis. We were able to talk with the winterers down south from Canberra and the Club was delighted that a number of past Australian expeditioners were able to attend. An engraved plaque to mark the historic event was unveiled by the Ambassador and will be on display over Christmas / New Year at the National Museum of Australia. Another highlight was the display of an extremely rare Bellingshausen silver medal minted in St Petersburg in 1819, especially loaned for reception by Club member and numismatist Tony Shields.

By all accounts the event was a great success and a full commentary about the Anniversary event will appear in the forthcoming Aurora. The Club has a series of Bellingshausen envelopes especially released by Australia Post commemorating the 200th anniversary event, are available for sale from the Club’s Treasurer. 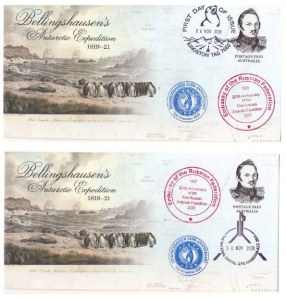 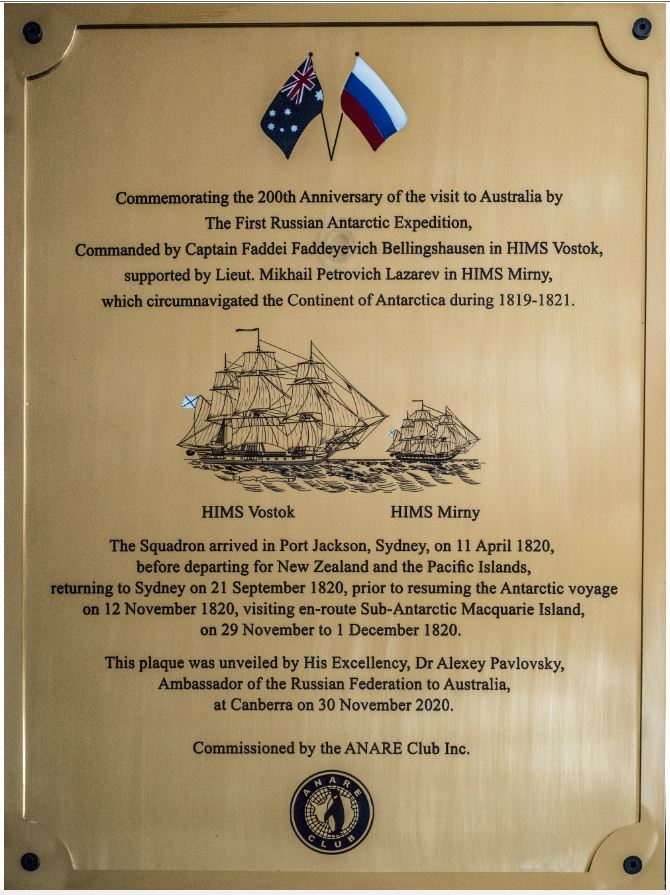 MY OVERVIEW OF MAWSON ‘67
Scroll to top