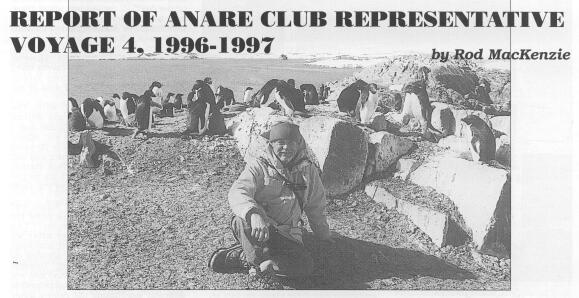 I was extremely excited and privilege to be chosen as the Club representative for 1996/97 and to participate in Voyage 4 which was to visit all four Australian stations, deliver 300 tonnes
of fuel to the Russians at Mirny, assist the Chinese with off-loading at Zhongshan and deposit aviation fuel at Sandefjord Bay east of the Amery Ice Shelf.

The adventure began on the 9th of December when all voyagers attended a briefing at head office on ship-board travel, first aid,  health and safety, helicopter travel, etc.

We arrived with our gear at the wharf at about 11.30 and at 1.p.m. donned our life jackets for lifeboat drill. This entailed getting into a lifeboat, being lowered overboard, cruising around the ship, up a rope ladder and back on board.

By 3 p.m. family and friends began to arrive and I was surprised to see Eric Macklin on the wharf. Eric was holidaying in Hobart and had come down to see the ship. I had great pleasure showing him the wonders of the new ice breaker after the Nella Dan. We were saddened to hear of Eric’s passing just a few short weeks after this.

After an hour’s delay we set sail at 5 p.m. into a cold and Wet southerly.

I was very impressed with the Aurora Australls, she is a very well built and comfortably appointed. The ensuite bathroom was indeed a luxury compared with the old “Bad” rooms on
the Nella and Thala. After being on board for several days and enjoying the comfort and the excellent facilities, I gradually became acquainted with the 100 or so fellow-passengers and crew. I liked the way in which the crew were part of the whole show and participated in all the ship-board activities along with the rest of us.

It was very interesting to converse and discuss issues with a new generation of expeditioners for it was 24 years since I had been South. It was pleasing to me to discover that there
was no difference at all. Today’s explorer has the same motivation, the same aspirations and talks the same language as the expeditioner of 30 years ago. I was also to see the effect that
women had on expedition life. We had 15 women on board, covering a wide range of occupations from doctors and biologists to carpenters and helicopter engineers. Whilst the social life on the ship was a lot less bawdy and raunchy than years gone by, there was a great deal more organised entertainment which was enjoyed and participated in by all. So whilst it may sound as though life was somewhat inhibited compared to years ago it did not detract in any way from the fun and enjoyment of the voyage.

Visiting the old stations was an interesting experience to say the least. Whilst it is rather saddening to see the old buildings of Mawson and Davis now becoming in most cases derelict, one cannot help being impressed by the size and sophistication of the modern station buildings. The elaborate and complex equipment, vehicles and services is mind-boggling to an old
sweat like myself. The recreation facilities are also first class and more in keeping with an alpine holiday resort. However despite the so called “luxuries” life still holds its challenge in Antarctica; danger is still there for the unwary and the careless. Whilst communication also is so easy and available, the feeling of remoteness is still very much apparent.

After visiting Mawson and Davis we rendezvoused with the Chinese ice breaker Snow Dragon and our two long-range helicopters spent the day assisting the Chinese with their station
resupply. During this time our ship proceeded to the Sandefjord Bay area where we were to depot fuel for the P.C.M. program later this year. The next day we were 50 kms from the
depot and the day was spent rolling drums of fuel from containers on the fore deck to the helicopter deck at the stern. At six drums a time and a 100km turn around this took most of the day. Following the relief of Davis we headed for Mirny with 300 tonnes of urgently needed fuel. After proceeding through some heavy pack ice we arrived 12 miles short of Mirny facing a band of fast ice two metres thick. This showed us the capabilities of the Aurora. After three days of very heavy going we arrived at the Mirny ice cliff just over 100 metres from their fuel farm at 4 p.m. only to be told by the waiting Russians that it was their knocking off time and could we start the refuelling the next day. However after some terse but diplomatic words from Dave McConnack, refuelling began forthwith. We entertained 10 of the Russians in the bar that night and at 2 a.m. they made a somewhat unsteady return to their station.

A Russian newspaper gave a glowing account of the exercise describing us as “Transoceanic Heroes” and of saving their station from a crisis situation.

The next stop was Casey and after extracting ourselves from the fast—ice at Mirny We arrived two days later.

I had not been to Casey for almost 30 years and I had left in January 1969 after we had just completed the building of the “old” Casey station. Now there was nothing left of my old home, no buildings to wander through and reminisce. Nothing but some rust marks on the rocks and some pipe ends protruding out of the ground. However the new station was an eye-opener and I did manage to get to Shirley Island where I had spent a great deal of my spare time in 1968. 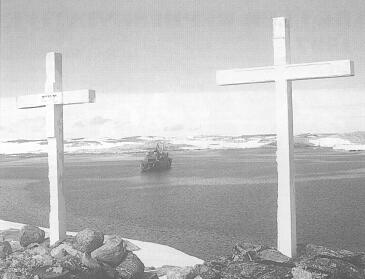 Graves at Wilkes – Reg Sullivan and Hartley
Robinson – with Aurora Australis and Casey
Station in background. Photo by Rod MacKenzie 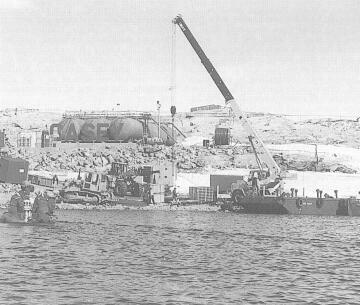 I was also provided with the opportunity to visit the old Wilkes station and “Chompers” Currie and I took a group of politicians and others on a guided tour. After nearly 30 years
it was an emotional experience and sad to see the old homely Wilkes station now filled completely with ice to the ceilings and only the tops of the roofs showing outside.

After all the nostalgia of Wilkes and Casey it was now time to head for Macquarie Island and home. The weather was pretty heavy after we cleared the pack but calmed somewhat on the morning we arrived, allowing us to go ashore for a few hours. However after only three hours the wind and sea got up so that we had considerable difficulty negotiating the rubber dingy
and the rope ladder of the ship. Macquarie has changed the least of all the stations and still retains a certain “homely atmosphere about it”.

So it was now time to think of Hobart and home after seven weeks of wonderful adventure. My sales of Club items had exceeded expectations, having sold in excess of $3500, of goods and signed up 22 new members. I enjoyed the bird watch and shipboard life especially the company of so many top men and women of ANARE. I have now a feeling of confidence in the future of Antarctica and feel proud that the legacy of the past is in good hands.

I thank the Club and tthe Division for providing me with what is probably my last opportunity to participate in an Antarctic adventure.

On voyage this year we had on board for the round trip to all stations ﬁve members of Parliament, two state three federal.

The question invariably is asked Why? What are the benefits of having scarce berths taken up by visitors when there is so much demand for scientific places? As an ex-polly and freeloader myself I can see a number of benefits from their presence on board. We all accuse our political representatives of not knowing what they are talking about. They make decisions which affect us without understanding the background of the issues involved. They cut back on funding without the faintest idea what the ramifications of such reductions will have. Besides that they are freeloaders anyway so why give them a berth that may be utilised in some more practical way.

However in this day and age it is imperative that our political representatives fully comprehend the issues. That they have seen and experienced the difficulties associated with Antarctic research and exploration. That they are provided with the opportunity to sit down with the expeditioners of all the disciplines so they become familiar with every facet of Antarctic life.

I must say that the five pollys on Voyage 4 went out of their way to involve themselves with everyone on board, including the crew. They became part of every activity and worked as
hard as any of us when required to do so. They undertook specific tasks and spent a great deal of their time discussing possible solutions to some of the future problems facing the Division.

On the social side they were very outgoing and participated enthusiastically in all our social activity on board ship and at the stations. The Director Rex Moncur involved them all in the discussion with Canberra and the foreign stations so they were fully aware of the background of events which occured during the course of the voyage. In my own discussions with them I found them to be not only interested in all things Antarctican but very supportive of our activites down there.

I am sure that in Canberra now we have another three Government members who are informed and knowledgeable on Antarctic affairs and will provide accurate advice to the
decision makers. The two state members from both sides of the house will also be able to provide informed advice to their respective parties whenever the State Government becomes involved in Antarctic activities. It is also pleasing to note that all five are now fully ﬂedged members of the ANARE Club.