Recipient of the Phillip Law Medal
2015 – Dr Desmond Lugg AM 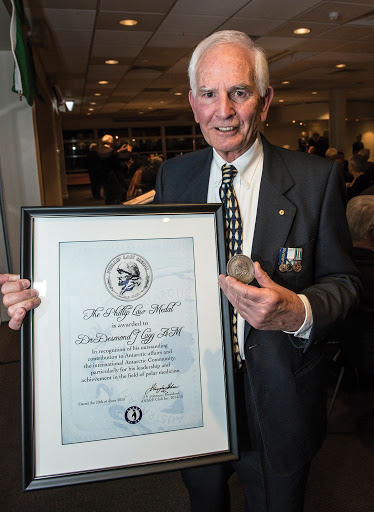 The Phillip Law Medal for 2015 has been awarded to Doctor Desmond Lugg AM.

Des is well known to many members of the Club. His contributions to Australian and international Antarctic endeavour are vast, and a small summary follows:

Des graduated in Medicine and Surgery in the University of Adelaide in 1961 and joined the Division as Medical Officer at Davis in 1963 and then returned to the AAD in 1968 as Head of Polar Medicine in 1968, a position he would hold until 2001.

He returned south to lead summer parties in the Prince Charles Mountains in 1970 and again in 1971, thus adding expedition leadership to his skills set and in 1980/81, led the International Biomedical Expedition to Antarctica. His leadership was not confined to the Polar Regions â€“ he also served as Acting Director of the AAD, Acting Assistant Director and Acting Assistant Director, Scientific.

Des subsequently became involved with NASA and collaborated with them in examining the possible effects of long term isolation on astronauts in preparation for the proposed NASA long period space travel to Mars. This study involved many members of ANARE, including the 1998 winter party at Davis where all expeditioners participated in NASA studies. When Des retired from the AAD in 2001 he went on to work with NASA for six years.

Des undertook his Doctorate in Medicine in the University of Adelaide, graduating in 1974. His thesis was published in part in ANARE Scientific Report Number 126 entitled â€œPhysiological adaptation and health of an Expedition in Antarctica with comment on Behavioural Adaptationâ€ in 1977, and he was also a joint author of an earlier ANARE Scientific Report entitled â€œThe Biology of the Vestfold Hillsâ€ which is still a very interesting and useful introduction to Davis.
His contributions to Polar Medicine have brought him both national and international recognition. He was awarded the Polar Medal in 1969, made an Member of the Order of Australia in 1984, was awarded a Centenary Medal and the NASA Distinguished Public Service Medal in 2006. He holds a Postgraduate Diploma in Polar Studies from the University of Cambridge, has been elected a Fellow of the Royal Geographical Society and has been given the SCAR Certificate of Appreciation for services to the Antarctic scientific community. He is the author of a formidable array of scientific papers.

Therefore, Des is obviously exceptionally well suited to be a recipient of the Phillip Law Medal, the highest honour that his contemporaries can award.

Des was presented with his medal at the Hobart Midwinter Dinner on 20 June.