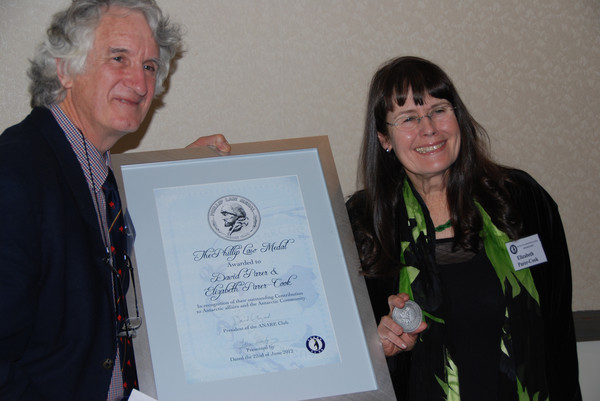 The announcement of the winner of the Phillip Law Medal is becoming one the highlights of our midwinter festivities. Our Club established the medal in 2010 to celebrate the life and achievements of Dr Phillip Law, founder of our Club and its long-time patron. Dr Law was the founding director of the Australian Antarctic Division, and served in this role, from 1949 to 1966, and he was a major figure in Antarctic affairs, as a leader, explorer and administrator. The Medal is awarded to an individual who has made an outstanding contribution to Antarctic affairs and the Antarctic community. This may include, but is not restricted to, contributions in the areas of science, technology, leadership, administration, environmental management, the promotion of tourism, or the raising of public awareness.
From a field of outstanding candidates, the selection panel, chaired by Brian Harvey, chose the documentary filmmakers David Parer and Elizabeth Parer-Cook. Through their highly acclaimed work, David and Liz have brought a greater awareness of Antarctica to a wide audience. The award was announced to great applause at the Melbourne midwinter dinner, and the winners were on hand to receive their Medals from Jason Mundy of the Australian Antarctic Division (AAD). Liz spoke of their surprise and sense of honour at being nominated for the Medal, let alone being awarded it. She provided some fascinating insight into the production, in 1982, of ‘Douglas Mawson – The Survivor’, including her use of cornflakes for frostbite blisters during make-up, and the dedication of, the three main actors in ‘The Survivor’, all 1982 Mawson station expeditioners!
David described the making of ‘Antarctic Summer’ and ‘Antarctic Winter’, at Mawson station in 1972; those were the first of his documentaries to be broadcast. He paid effusive and genuine gratitude to his fellow expeditioners, without whose ongoing support
and assistance in difficult conditions, he could not have made these films. By coincidence, many of them, including life-long personal friends, were at the Mawson 1972 40th reunion at the Melbourne Midwinter dinner on the night.

The Parers were very popular winners, and photographers were lined up to capture their grins whilst holding the impressive Medals and certificate; some gave up in frustration at the delay. At one table, documentaries made by the Parers were discussed twice before dinner, and before the announcement was made! At another table a suggestion was made, that the Parers could further serve the Antarctic community by writing a book, detailing the making of their many documentaries, and [discussing] whether or not environmental and management problems highlighted in the documentaries have been solved. As Tim Bowden writes in The Silence Calling:’Just how much influence Parer’s films had on the rising fortune of biology is difficult to gauge, but by 1980 a growing awareness of the importance of the biological diversity of Antarctica and its surrounding seas, saw a big jump in the Federal Government’s budget in the commitment to marine sciences…’

For those who are not familiar with the work of the Parers, we have reproduced (with the permission of the nominators) the following extracts from the nomination:’Most of us know of David Parer and his colleague and wife Liz Parer- Cook, through their marvellous, sometimes breath-taking, always riveting, wildlife documentaries, filmed in Australia, Papua New Guinea, Galapagos Islands, North America, and Antarctica, mostly made whilst they were producers with the blue-chip ABC-TV Natural History Unit.

They are good, very good, among the best in the world, but have the resultant documentaries lived up to the high standards of public education and entertainment, set when Scott took Herbert Ponting south with him, and when both Shackleton and Mawson took
Frank Hurley south? What has been the Parer’s contribution to the Australian and international Antarctic scene?

‘They have won over 130 Australian and international awards, including the coveted Wildscreen’s Golden Panda (uniquely) twice, three Emmys, and David was voted’Australian cinematographer of the year’ three times. Extensive segments of their footage have been included in many BBC series, including Life on Earth, Life in the Freezer, and in numerous National Geographic documentaries.’David Parer and Liz. Parer-Cook entertain us, they are educators, they are communicators.

What use are scientific discoveries, if they are restricted to a chosen few within laboratories? How much more glorious are discoveries, if shared with those interested worldwide? How much more beneficial are discoveries, if not only shared with the cognoscenti, but if introduced to new, unaware, unexposed people, worldwide. That is what the Parers have done. They have taken the Antarctica we all love, and shown its beautiful details, and explained in common language its scientific marvels to the world – and they have done it with such fluid, picturesque, scientific accuracy as to be without  peers in Australia, and among the best in the world.
‘The Parers have made many outstanding, memorable documentaries, showing life in polar and subpolar regions. What were they about, and what was their significance?
These films include:
‘ Broken Silence’.
Filmed during 1970, this was made for the Antarctic Division, and was one of Dave’s first films. It shows the hustle and bustle of a changeover, and the comings and goings during a busy summer, at Australia’s premier base –
Mawson. ‘Antarctic Winter’ (1972).
The winter drift scenes, winter life in an Emperor penguin colony, auroras and sea ice travel with the huskies, set the international bar of excellence, and it took two decades before the BBC or National Geographic could catch up.
Antarctic Summer’ (1972).
This film shared the excitement of the return of life in early spring -something about which most people in Australia had no comprehension, until this film.
‘ Edge of the Cold’ (1975).
This is a series of four half-hour films, which show intimately, the life cycles of many of the animals on Macquarie Island. David’s footage of the in-flight courtship of albatross, is breathtaking, and has not been equalled; his close-ups of elephant seal beachmasters fighting, are unforgettable; and the colour, rhythm and sounds portraying life in a king penguin colony, was the envy of producers worldwide.
‘ Douglas Mawson: the Survivor’.
Made in (1982), this is a celebration of the centenary of the birth of Australia’s greatest Antarctic explorer and scientist, Sir Douglas Mawson. It is an objective account of some aspects of his life, and includes re-enactment of his dramatic, fateful man-hauling trip of exploration in 1912, in which Ninnis and Mertz lost their lives. This long overdue film blends, in a most sensitive and agreeable way, old and current footage, re-enactments and interviews, to tell Australians a little about one of our own, a truly great Australian.
‘Fears Do Not Kill You (IBEA) Pt1)’and ‘This is No Place for Humans (IBEA Pt2)’ (1983).
The International Biomedical Expedition to the Antarctic (IBEA), was a project to experiment on people in isolation in Antarctica. It asked what we all asked ourselves during winter – does isolation in Antarctica affect us, and how do our minds and bodies cope? Was this grand experiment a success or a failure? The Parers documented it, warts and all. A probing film of interest to all people living in remote areas anywhere on Earth, and in outer space!
‘ Wolves of the Sea’ (1993).
This spectacular documentary on killer whales, filmed in high latitudes of the northern and southern hemispheres, describes their hunting techniques, and discusses learning in a wild animal, thus raising the question of animal intelligence.
‘Mysteries of the Ocean Wanderers’ (1993).
Filmed mostly in the Crozets, in the southern Indian Ocean, this is an extravaganza of beautiful footage of one of the world’s most majestic animals â€“ the wandering albatross. It also shows penguins and seals etc., but the wanderers, and the groundbreaking story of their foraging habits, steal the show.”Surviving Extremes’ (2006). In a continuing demonstration of their ever-expanding versatility as documentary producers, the Parers compare the stresses of life in a remote Antarctic setting, to those encountered in space travel. They use Australia’s only astronaut, Andy Thomas, to discuss the obvious, powerful similarities.
Well done, David Parer and Elizabeth Parer-Cook!
– Supplied by David Ellyard.