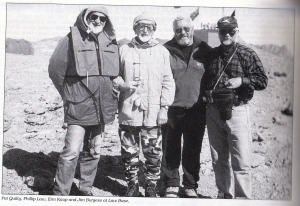 (L to R) Pat Quilty, Phil Law, Jim Burgess and Enn Kaup (Enn was an Estonian scientist working with Jim in the Larsemann Hills and Pat and Phil were visiting Antarctica as speakers on the Kapitan Khlebnikov. It was Phil’s last visit to Antarctica

I regret to inform you that Dr Jim Burgess has died. He died on Wednesday after a brief illness and a notice will appear in the paper tomorrow. His wife, Trish, was with him when he passed away. Jim has requested that there be no funeral. He is survived by his elderly mother and brothers and by three daughters.

He was a prominent geomorphologist and undertook several summers at the Larsemann Hills, and was a member of the department of geography and oceanography at ADFA. To many Davis-ites in the 1990s he was “Mr Larsemann Hills”