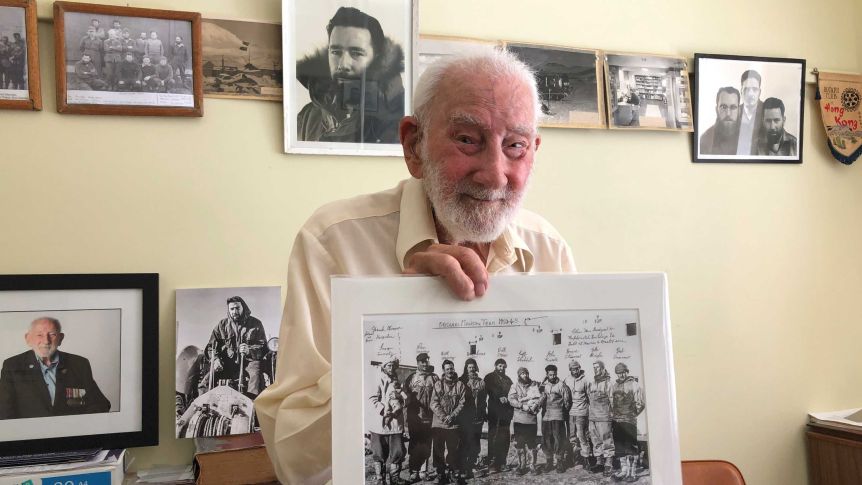 In a quiet suburban street north of Brisbane is a hidden treasure trove of Australia’s Antarctic history, in the form of 100-year-old John Russell.

A former engineer, John is the last surviving member of a 10-man team who first established Mawson Station in 1954, huddled on exposed rock, surrounded by ice — the longest permanently operating station south of the Antarctic Circle.

His life is inextricably linked with the ice floes and cold rock of Antarctica, and after a century of life, his memory is sharp and stories many.

But he also has a wide history away from Antarctica — from serious illness thwarting his service in World War II, to time spent in the Darwin Overland Maintenance Force — and a long and happy family life.

In 1928, as a London schoolboy, John was taken to a lecture about Sir Ernest Shackleton’s Imperial Trans-Antarctic Expedition — an attempt to make the first land crossing of the Antarctic continent from 1914-17.

They captured John’s imagination and sparked a lifelong interest in Antarctica.

His father later arranged for young John to write to Lady Shackleton, who lived quite close by — and John was invited to tea.

Years later, as a young engineer, he decided to leave England for Australia in the hopes of joining Australia’s burgeoning Antarctic exploration.

“I came here in 1938 to join an Antarctic expedition, because I had decided when I was 10 years’ of age that that was what I was going to do,” John said.

War, however, put Australia’s plans and John’s dreams on hold.

He enlisted and became a driving instructor, but was struck down by serious illness.

“Typhoid in the Army, that was in 1940–41, gangrenous appendix — [I was] saved by the Flying Doctor’s Service at Alice Springs,” he said.

In hospital for six weeks, John was left behind when his division went overseas.

A short time later the Army decided he was medically unfit and discharged him.

“Ships were in Sydney Harbour waiting to take troops to Suez, and they had more ships than they needed.

“Some of the crew of the Aquitana had not had leave for nearly two years, so they put them on a ship and sent them back home, and recruited Aussies to take their place — 25 Australians.

“I was down in the engine room.”

After enjoying several trips around the ocean, John returned to Australia, and in 1944 joined a civilian construction group allied with the Army, registered as a diesel fitter, known as the Darwin Overland Mobile Force.

The civilian group, in support of the Army, was sent to Darwin to begin work on rebuilding the shattered city after the bombing in 1942 — an immense and challenging task.

In October 2020, John put a classified notice in the Veterans’ Affairs newsletter, hoping to reconnect with some of his former friends and colleagues from that time:

“Seeking anyone who serviced with or remembers DOMF, or am I the only one left? I turned 100 in June 2020. Please contact me. In hope.”

He had eight responses, but none from his peers.

While Australia recovered from the war, thoughts had returned to establishing a permanent base in Antarctica.

Sir Douglas Mawson had pushed hard for new commitments to the project, and by 1947 he was advisor to the Australian National Antarctic Research Expedition (ANARE), led by Phil Law.

By 1947, John had moved to New Guinea, working in petroleum exploration, while in Australia movement had begun in earnest to plan a permanent Australian base on Antarctic land.

Serendipity meant one of the leading figures in the efforts was an RAAF captain John had served with in Darwin.

But the project still had limited funding, so after a successful interview, he returned to New Guinea.

At long last, a telegram arrived. He had been formally appointed the Antarctic Division’s engineer, and was wanted in Melbourne immediately.

His dream was realised, with a 15-month round trip to Macquarie Island in 1949, to Heard Island in 1952, and finally, was involved in the government’s efforts to establish a permanent base, under the leadership of the Antarctic division leader Phil Law.

“The only place we could find which looked possible from aerial photographs for this particular base, [was] with a fairly narrow entrance into [Horseshoe Bay], where around the bay were little bare-nosed rocks sticking out, and one big rock shelving down from the ice,” John said.

“The plateau ice flowed down each side of this rock into the sea. That’s where we built the base. And it’s still there today.”

As engineer, John’s role was to manage and modify necessary equipment, and plan the buildings that would form the new base, on a “very tight budget”.

By 1953 the team had sailed on MV Kista Dan to Antarctica, and in early 1954, the ship had arrived in Horseshoe Bay and the work began.

“We had these pre-assembled store huts which we’d built at Tottenham, cut them all out, numbered the bits … and we assembled them there,” John said.

“The first thing ashore from the ship was a Ford 10 motor horsepower petrol engine driving the 5kVA generator, so we had radio contact through the ship back to Melbourne and also power for the huts.

“We had about 10 days with the ship and the crew there working, and in that time we got the kitchen and the living area built, and the main store hut for the food, and one store hut for other equipment.”

Preparing equipment in the 1950s to operate at freezing temperatures was challenging, with the concrete needed to pour a foundation for the generator mixed with anti-freeze.

A photo shows John in Antarctica, sitting on a Ferguson tractor he had acquired and modified in Melbourne, lowering the 2.5 tonne generator onto its new concrete pad.

“It was a very touchy job and two or three fellows were there handling and lowering, and it worked wonderfully,” he said.

A family at home

But while John was in Antarctica, his new wife Joan was at home.

She was a “Ten Pound Pom” and they met through a friend at a club in Melbourne, marrying in December 1953.

“We married … on the 19th of December — and on the fourth of January, I sailed away for 15 months,” John said.

It was a scenario Joan was to become familiar with; by 1958 John was contacted by America’s Antarctic division, keen to enlist his expertise for McMurdo Station on Ross Island.

“That was my last trip and I said to Joan, ‘I’ll buy you a colour television set’,” John said.

“They were just coming onto the market.

“She finally agreed, and I was away with the Yanks for nearly 15 months.”

The American base was run by its Navy and had a very different feel to the Australian science-led missions, with a mess hall and 24-hour food on demand.

After returning from that trip, John said he never went back to Antarctica, but remained active in the Antarctic community of current and former workers and visitors.

“I got settled into married life, and also the work I was doing with BP was very, very interesting,” he said.

The Russells lived in Dee Why for several years, while John worked as a technical service expert for BP across the region.

Later they ran a banana plantation in northern New South Wales; with their daughter Sue, John and Joan also spent time in Singapore before eventually settling in Brisbane.

Joan died in 2012, and it was not until after her death that Sue discovered the depth and breadth of her father’s stories of his time in Antarctica.

A century of memories recorded

A five-year project developed, to record John’s memories and turn them into a book, with the help of fellow Antarctic veteran Trevor Luff, and writer Dale Lorna Jacobsen, now published.

In 2020 his family celebrated his 100th birthday with members of the ANARE Club.

John is now “a hundred-and-a-half” years old, and lives at his Deception Bay home with the support of his daughter Sue and family.